Yarn crafts vary from knitting and crocheting, to string art, tassels, and pom poms, just to name a few.

You can buy pom pom makers, specifically designed to help you easily make varying sized pompoms out of the string of your choice.

They are easy to use and work great.

But what if you don’t have a pom pom maker or if you’d rather use a DIY by-hand version that is maybe even quicker?

We’re going to take a look at the process of how to make a pom pom out of yarn by hand, and then look at size variations you can make to the pompoms: small, medium and large pom poms!

We’ll make three different sized yarn pom poms by hand, and talk about how to make the best pom poms possible using only yarn, scissors, and your hand!

Here’s how to make them. 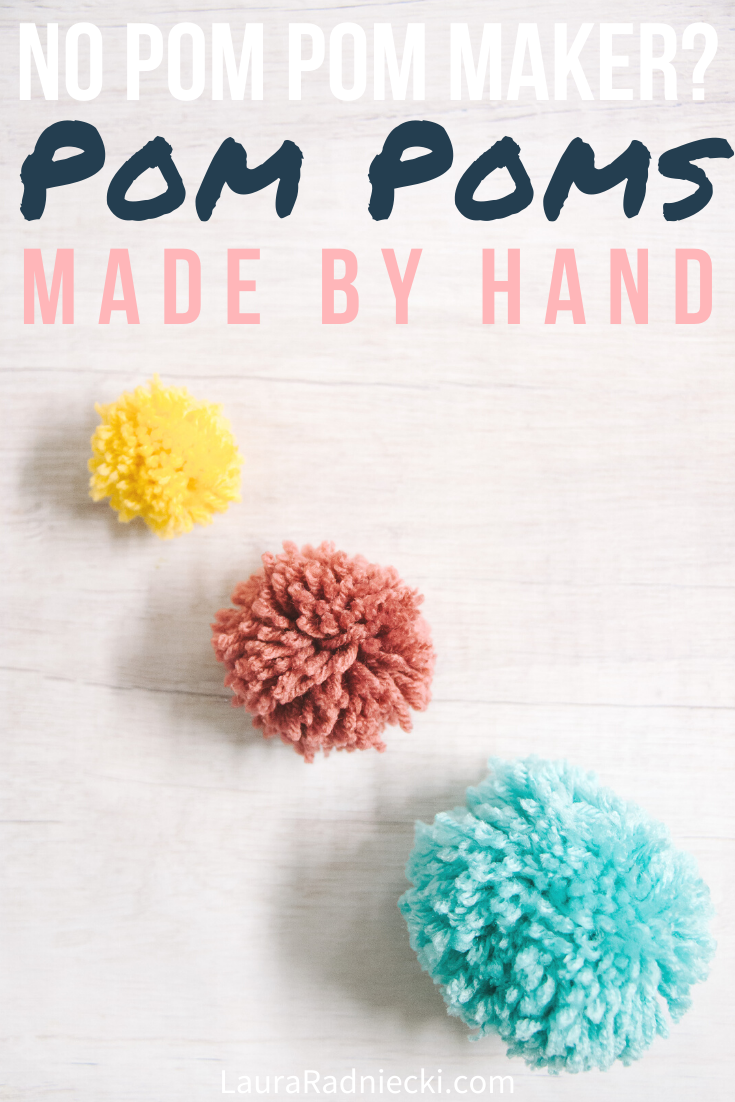 How to Make Yarn Pom Poms By Hand, Without a Pom Pom Maker 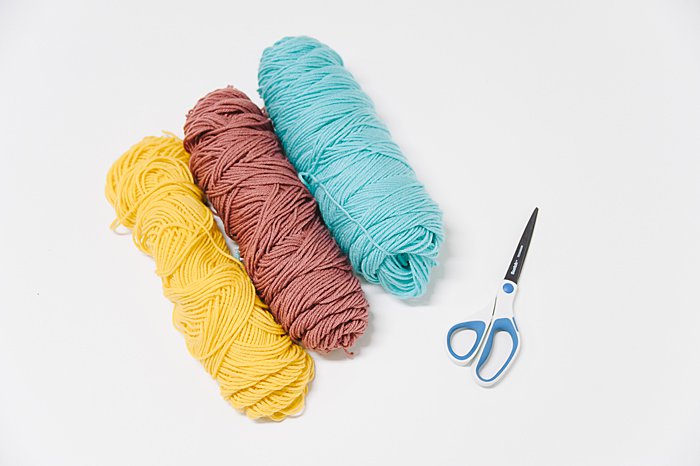 Step 2. Cut an 8″ section of yarn, and slip in between the fingers you’ll use to wrap the yarn onto.

Cut an approximately 8-10″ section of yarn.

This will be the string you use to secure your pom pom together later.

Slip the string between the fingers you’ll use to wrap the yarn onto (see details below); you’ll leave it here while you do the next step.

For a SMALL pom pom, you use TWO fingers to wrap the yarn around. Slip the 8″ yarn piece between your top 2 fingers, as shown below with the yellow yarn.

For a MEDIUM pom pom, you use THREE fingers. Slip the 8″ yarn piece between 2 of your top 3 fingers (this is not centered, but you can adjust later.)

For a LARGE pom pom, you use FOUR fingers. Slip the 8″ yarn piece between the top 2 and bottom 2 fingers of your hand. 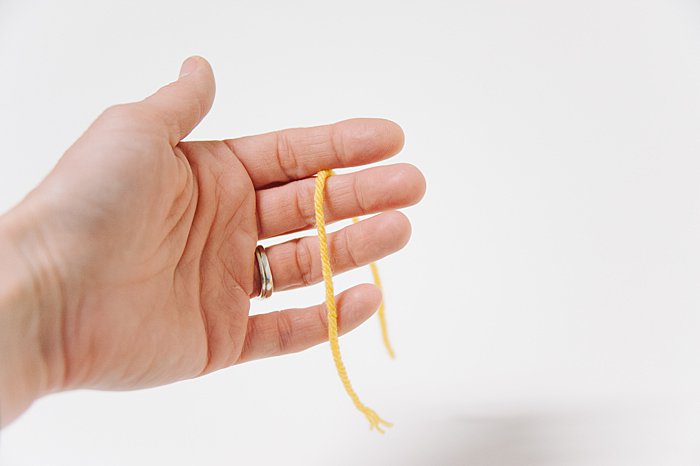 Step 3. Wrap yarn around your fingers.

Keep the 8″ piece of yarn tucked into your fingers, and wrap the yarn around the tips of your fingers.

(TWO fingers for a small, THREE for a medium, and FOUR for a large pom pom.)

**I’ll show you below how the pom poms looked, what modifications I made, and tell you the best wrapping numbers I found through trial and error. KEEP READING!

(The yellow, two-finger wrap below is 50 times for my first try at a small pom pom.) 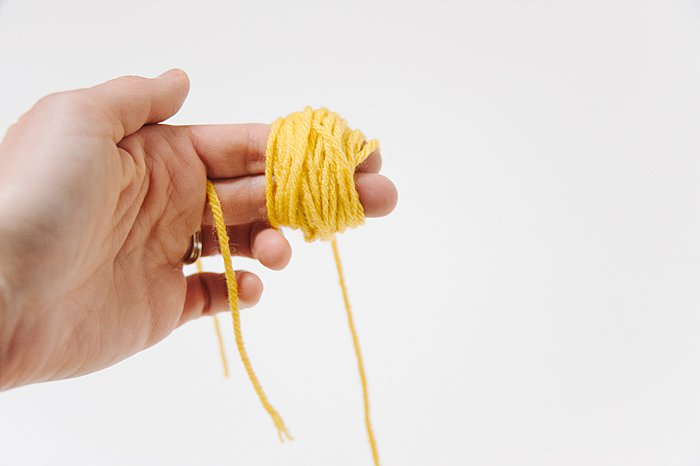 (The rust, three-finger wrap below is my first try at a medium pom pom: 75 wraps. You can also see the 8″ string between my top two fingers.) 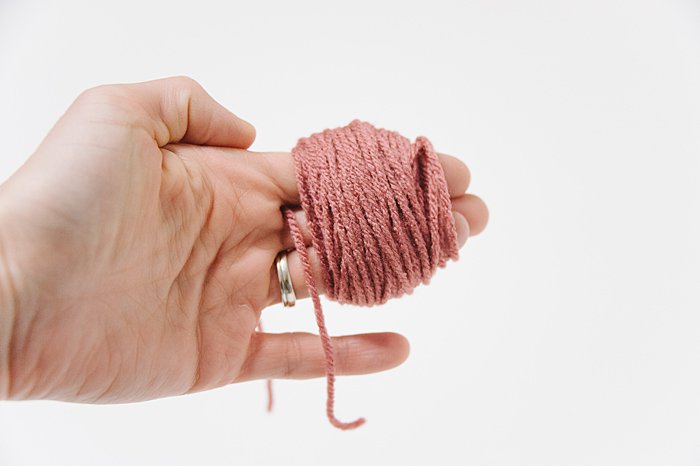 *Not pictured: my first try at a large pom pom was 100 yarn wraps on 4 fingers.

Step 4. Once wrapping is complete, take the 8″ section of yarn and tie it tightly around the middle of the wrapped yarn bundle.

Once you’re finished with the wrapping, carefully bring the 8″ section of yarn toward the wrapped bundle of yarn at your finger tips.

Tie it around the wrapped bundle of yarn. (I used the fingers of my non-wrapped hand, and then my teeth to tie it as the photo shows below.) 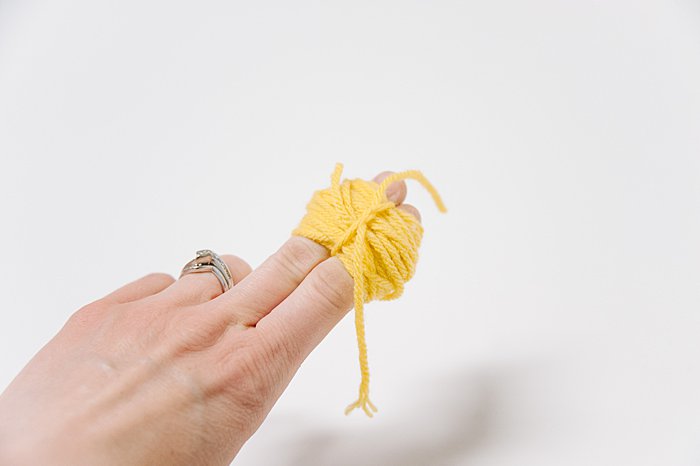 Slowly and carefully, remove the wrapped bundle of yarn from your fingers, making sure the 8″ tied string stays in the middle of the yarn bundle and doesn’t come untied. (If it does, your whole pompom will unravel.)

Pull the 8″ string TIGHT and knot to secure once it’s off your fingers. This is what keeps the pom together.

PRO TIP: If you’re having trouble getting it tight enough, you can try wrapping the two tails of the 8″ string around to the other side of the pompom bundle, and knotting again on that side. On tricky pom pom bundles that I couldn’t seem to tie tight enough, I found this can help get a tighter hold around the bundle before you start cutting the loops apart.

(This is the 50-wrapped 2-finger small bundle.) 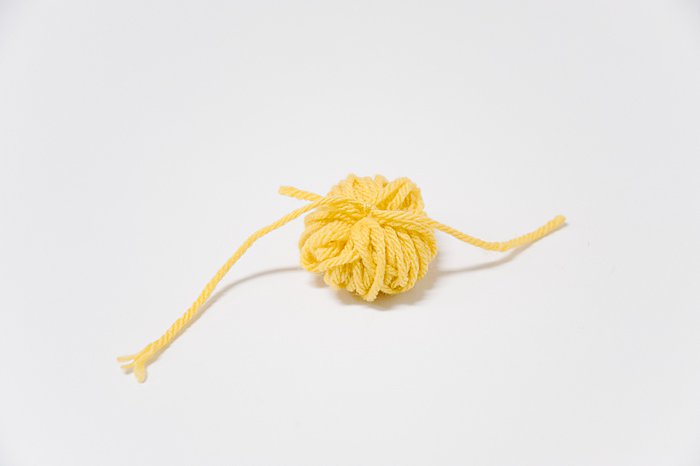 (This is the 75-wrapped 3-finger medium bundle.) 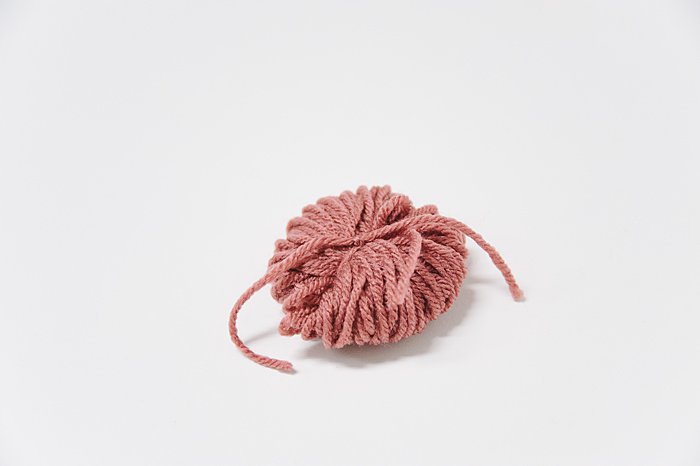 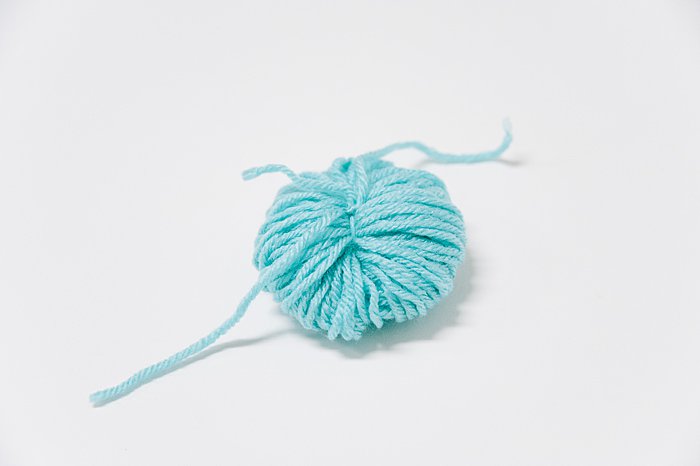 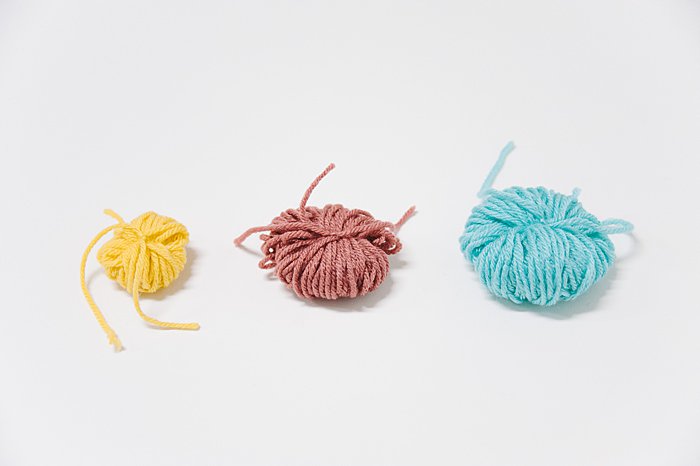 Step 5. Use scissors to cut all loops free around the pom pom bundle.

Using a sharp scissors (or you’ll get annoyed fast), carefully cut all of the loops free around the outside of the pom pom bundle.

(Photo below from another pom pom project.) 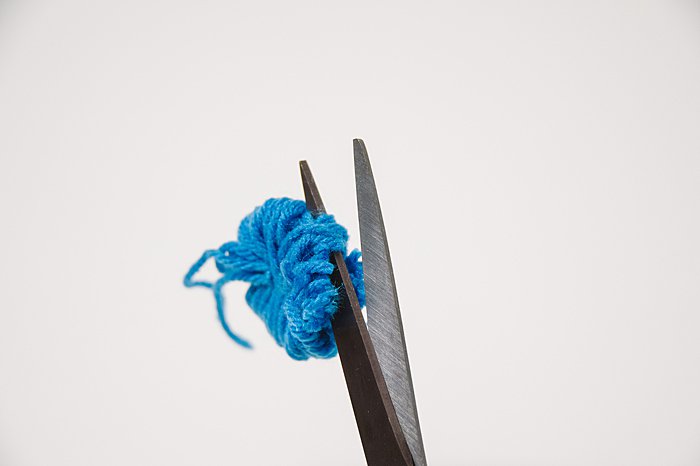 Continue cutting and you’ll see your bundle turn into a pom pom. (A shaggy one, but we’ll take care of that next.)

You can hold the two long ends of the tie-string and give your pom pom a shake as you cut the loops free. 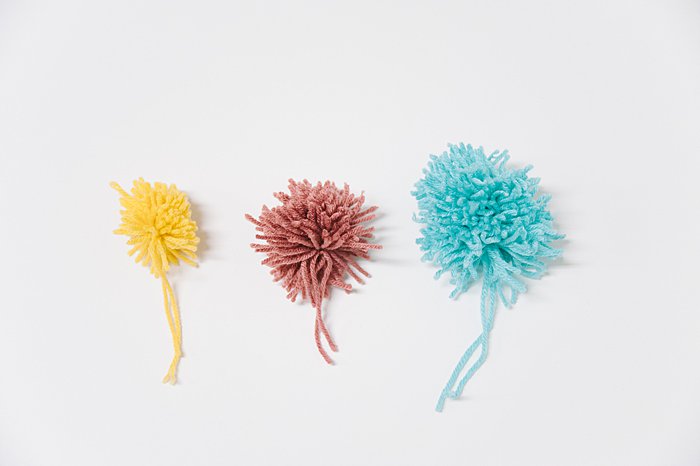 Step 6. Trim the shaggy pom poms into round balls.

Keep turning the pom pom and trimming off long or uneven sections until you have a tidy, smooth, round pom pom. 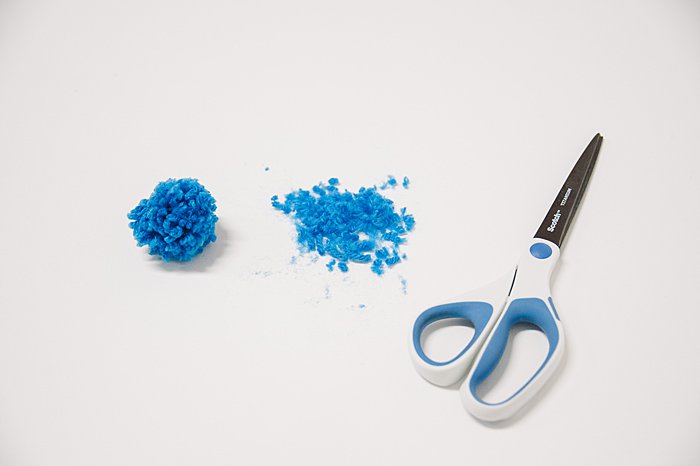 Below are what my pom poms looked like after their trim.

They are round and pom pom-like, but the medium and large versions look too sparse to me.

The small version looks full and round, so 50 wraps is perfect for a small pom pom. 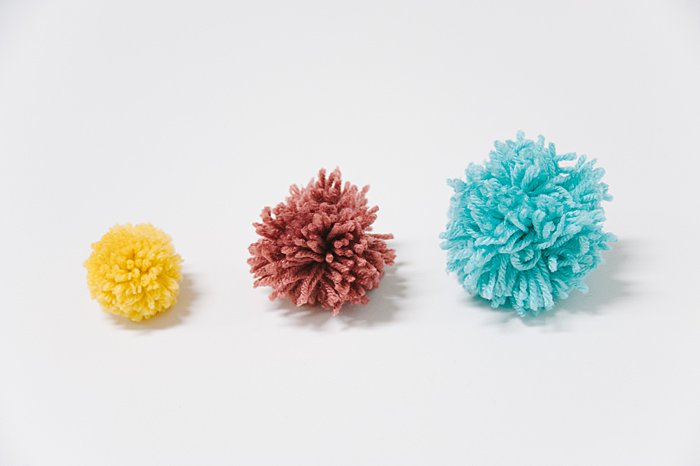 I decided since the 75-wrapped medium looked a little sparse, I would try and see what 100 wraps of 3-fingers looked like for the medium pom pom. 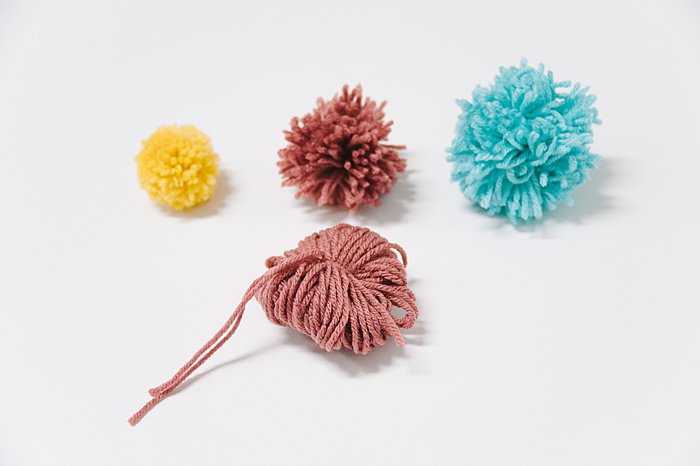 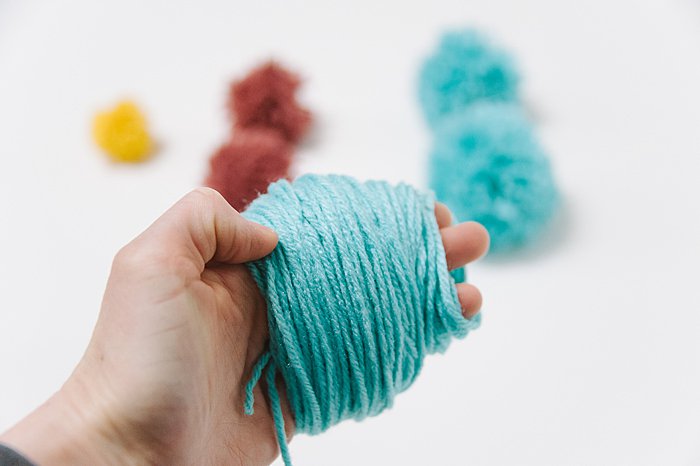 Once I trimmed them all up into round pom pom balls, they looked like the range pictured below. 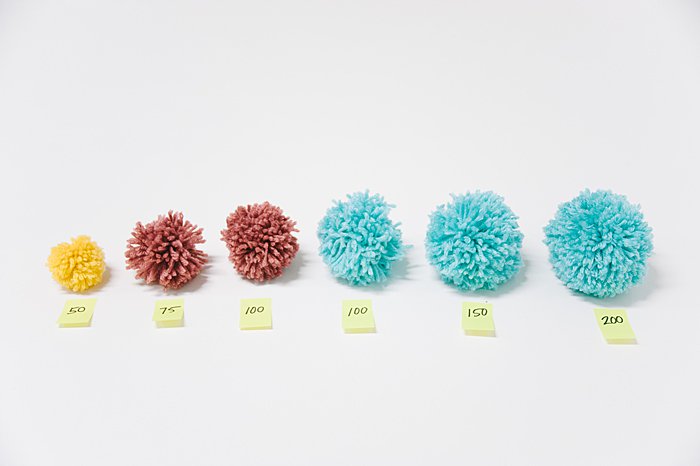 I eliminated my least favorites, which were the sparse 75-wrapped 3-finger medium and 100-wrapped 4-finger large pom poms. 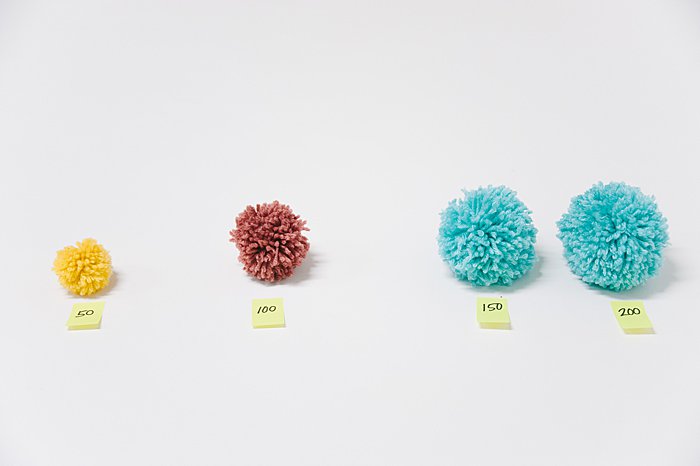 The difference between the 150 and 200 wrapped 4-finger large pom pom is subtle, but I still like the fuller 200-wrapped version better. 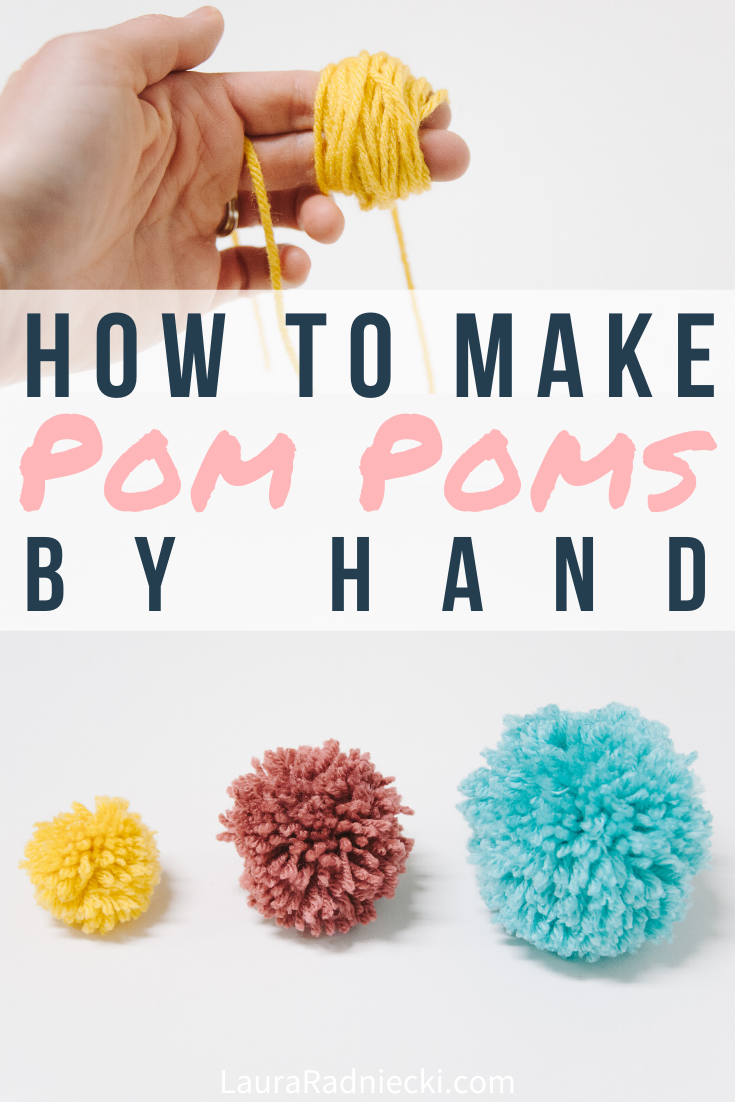 We have the pom pom winners! 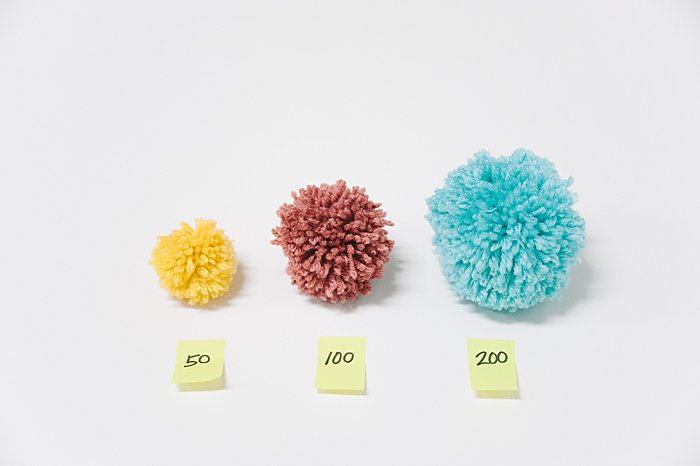 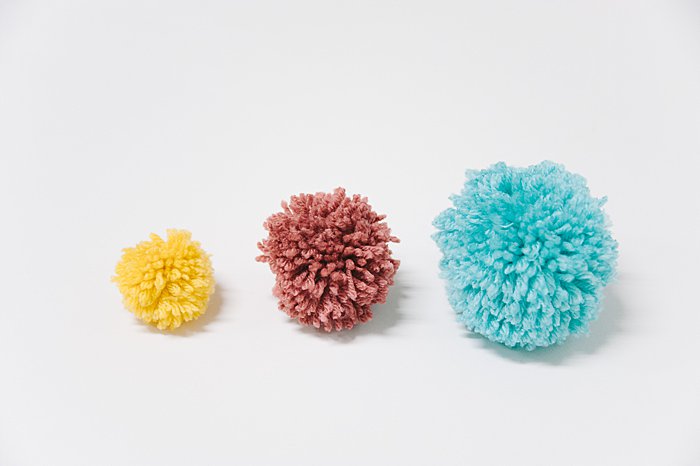 I timed how long it took me to make a small yarn pom pom (this was not my first one; this was after I had made a bunch and was familiar with the process) and it took just over 2 and a half minutes, start to finish! 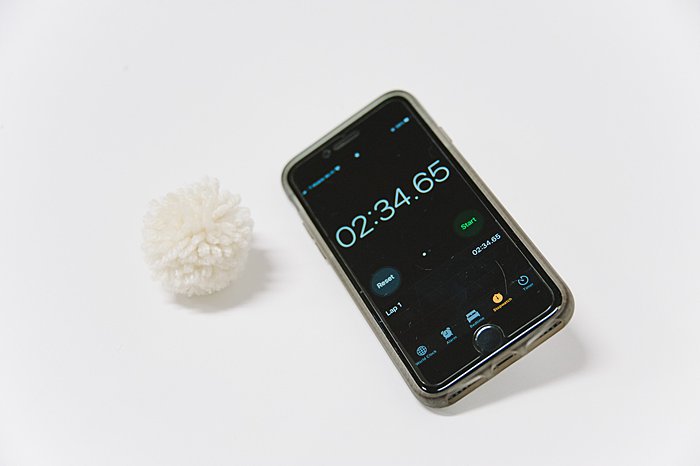 Pom poms are a great craft to know how to make.

They can be used to make Christmas ornaments, garlands, gift wrap embellishment, keychains, mobiles, and more.

You can obviously make the process more precise by using a pom pom maker; a tool specifically designed to help you make a pom pom.

But if you don’t have one (or want to make them even faster by hand), you can easily make a pom pom with just yarn, your hand and a pair of scissors!

Watch out… now you’ll want to make a dozen! 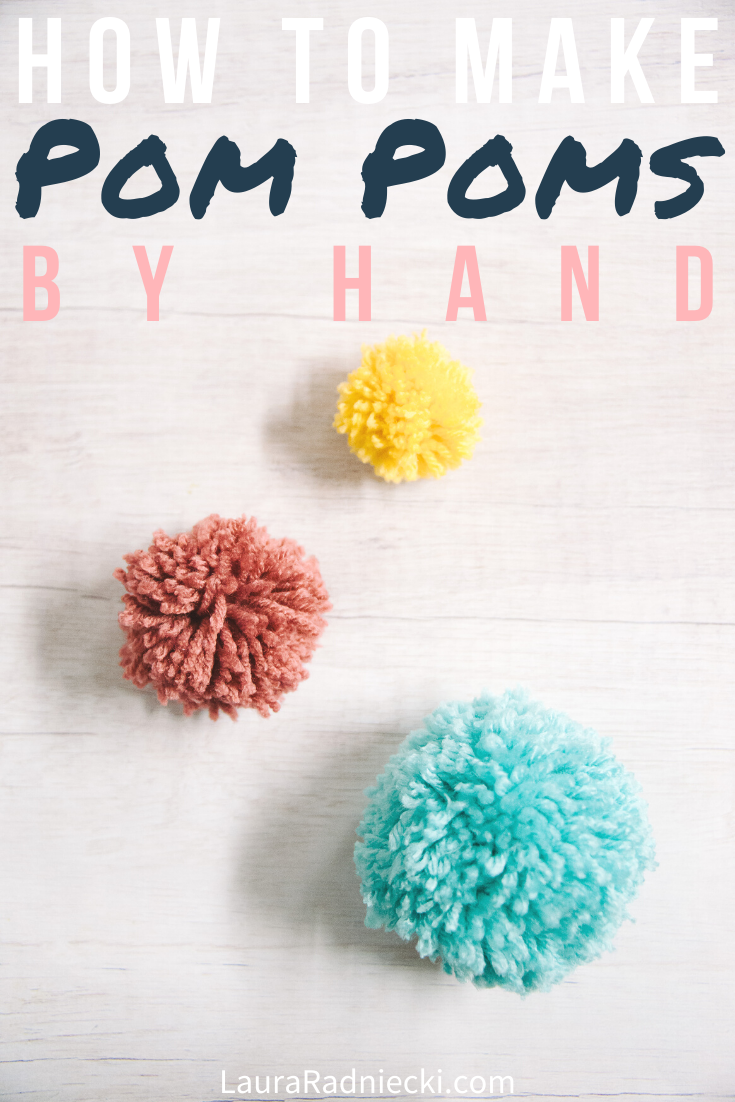 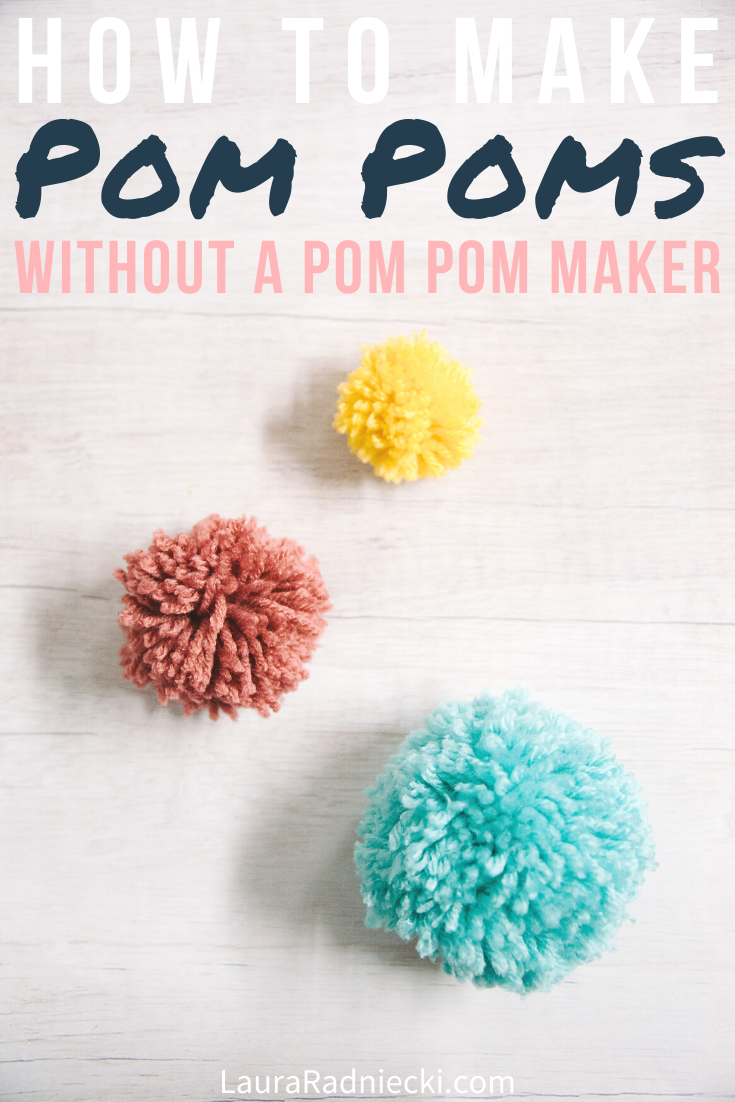