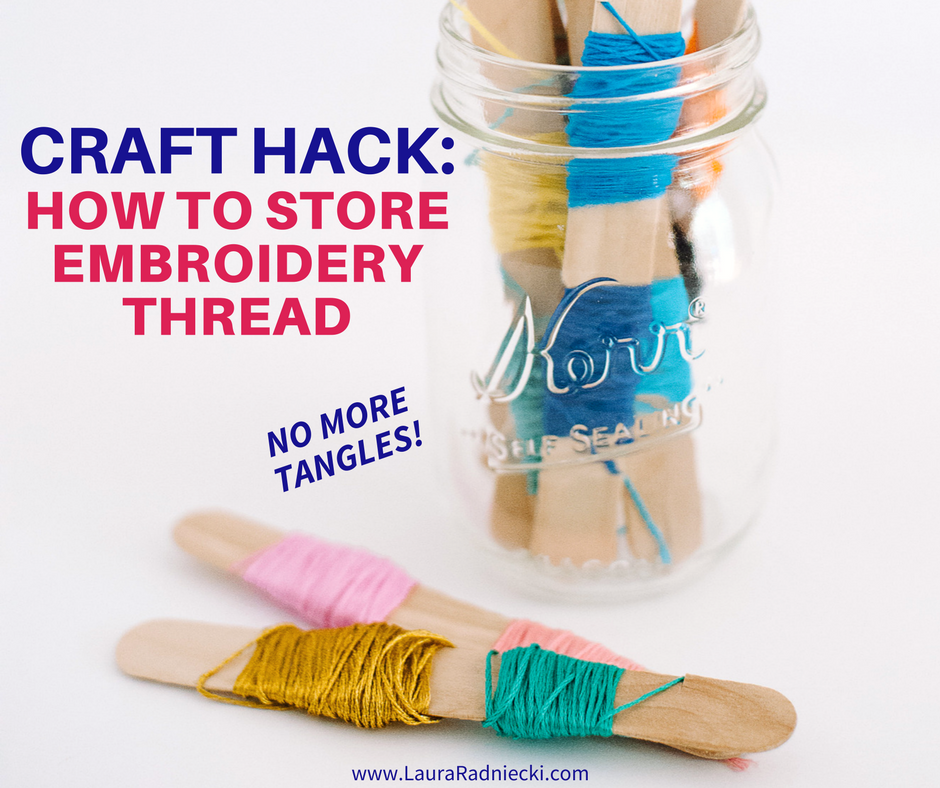 I love all kinds of crafts, but I’ve got a new favorite these days.

I’m a newcomer to embroidery, but since trying it out a few months ago, I am hooked. I’ve made a handful of projects, hung three finished hoops up in my house, and given one as a gift so far.

However, anyone who has used embroidery floss before, in any shape or form, knows that it can be the biggest pain in the butt because of the tangles!

You can’t use embroidery floss without taking it out of its little paper wrappers. As soon as you slip those off, it seems like it takes less than 10 seconds before the whole bundle is in a knot. (At least that’s the way it goes for me!)

When you’re making an embroidery project that requires a variety of colors, you’re going to be switching back and forth often. In the State of Minnesota embroidery project I shared recently, I used eight different embroidery thread colors. That is a lot of thread to keep separate and untangled.

In an effort to keep my embroidery thread untangled and separated, and to make it easy to store, I used a popsicle stick method that is working well for me!

How to Store Embroidery Thread Without Tangles

Step 1. Cut a small notch in each end of the popsicle sticks.

At first, I tried cutting a notch right in the middle of the rounded end of the stick. Every time I tried it this way, the whole stick cracked and splintered down the middle, at least an inch in from the end.

Next, I tried making two notches on the side, a little ways from each end, and that seemed to work well.

The trick is to make the notches deep enough to make sliding the thread in easy, while not cutting too far through the stick. My cuts could be a little deeper in some parts, but most worked fine. 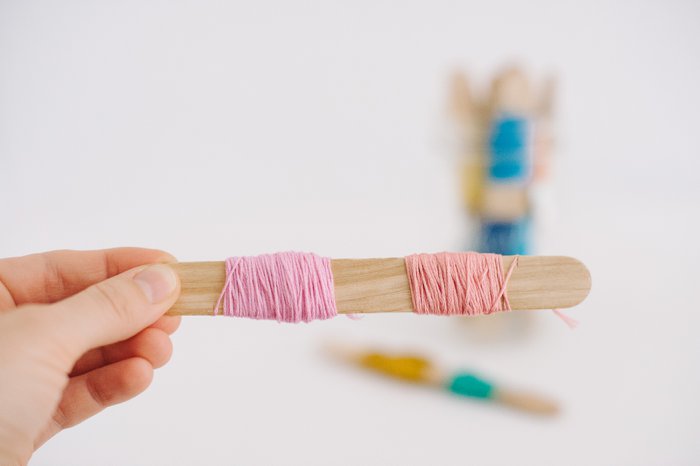 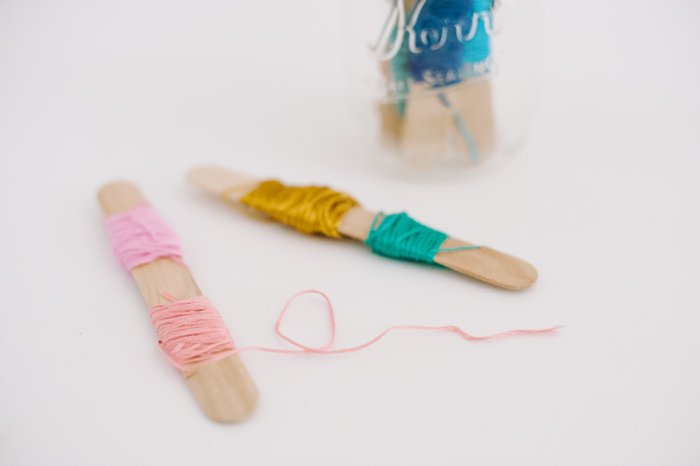 Step 2. Wrap Embroidery Floss around sticks, putting the end into the notch to hold it in place so it doesn’t unravel.

Step 3. Store sticks in a container, like a mason jar.

Pull them out and use them as needed, and put the end of the embroidery thread in the notch when you’re done!

I was able to put two different colors on one stick. 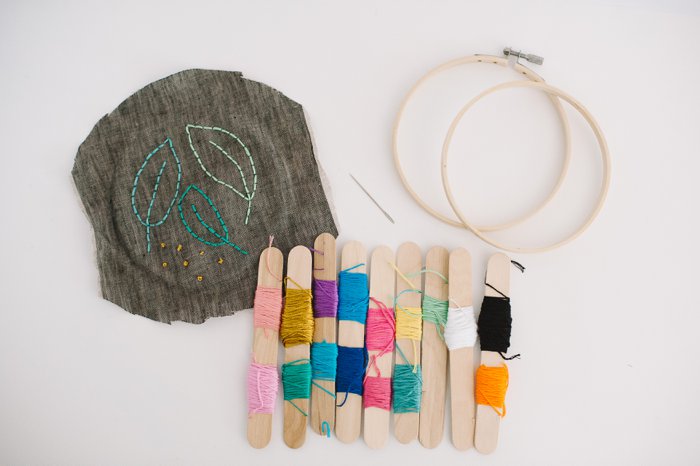 This embroidery thread organization and storage method helps to keep my floss untangled, sorted, and ready to be used.

Plus, it’s pretty to look at too! 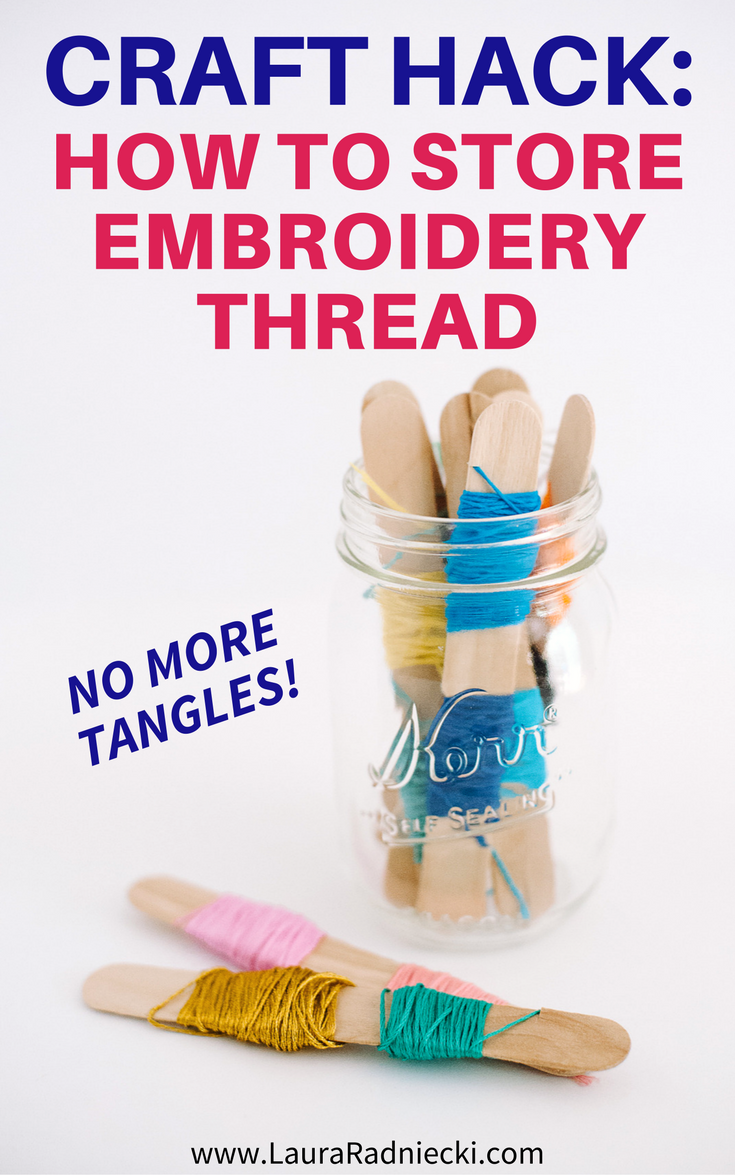 Previous Post: « Minnesota State Embroidery Project
Next Post: Embroidery is the Best New Craft Hobby | So Cheap and So Easy »