Normally, I would post the bulk of these photos in an album on Facebook and just choose a few to show here on the blog, BUT… for two reasons, I have decided to change the usual and add a handful [big handful] here instead.

1 – My grandpa was in the Navy during WWII and I wanted to show him these photos. Because he doesn’t have Facebook, this is the most direct route to him.

2 – The internet connection from the Super 8 in Lake City, FL is FASTTT, so Blogger was happy and uploaded the photos much faster than normal. Otherwise, I wouldn’t have been able to be patient enough to wait for all of these photos to load.

BUT, thank you internet connection; Grandpa [and all of you who stop by to check in as well], enjoy the photos and I can’t wait to talk to you about the inside of the ship etc. 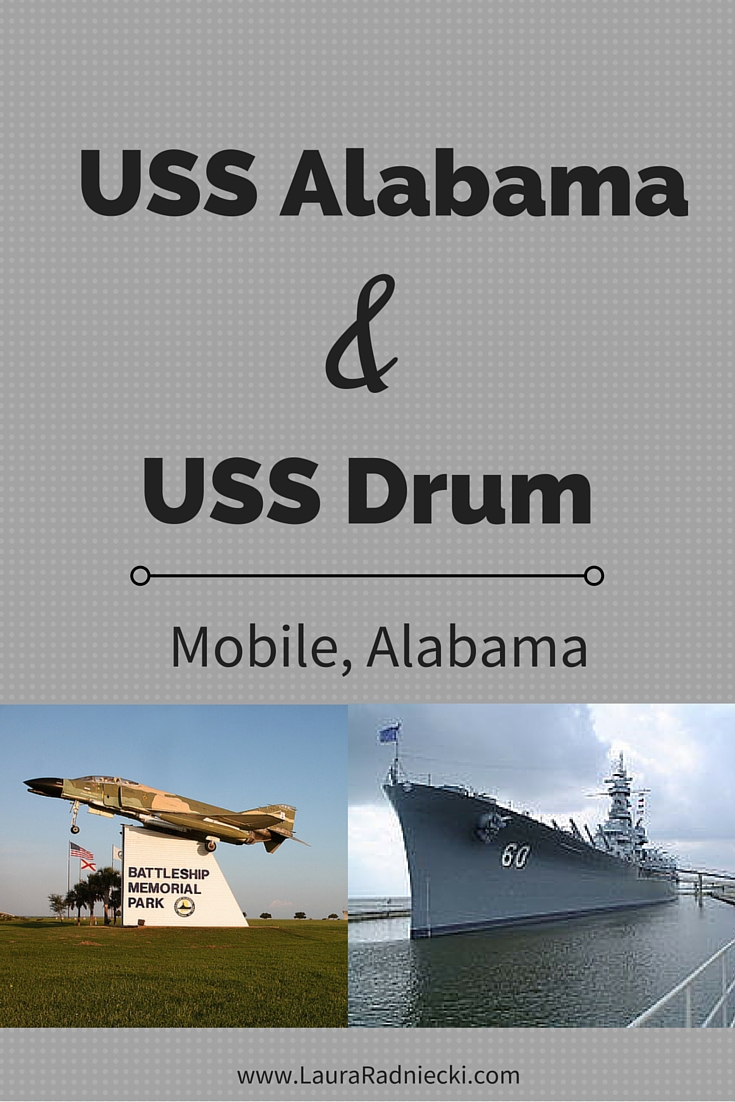 This photo is from the Korean War Memorial right inside the USS Alabama Battleship Park. 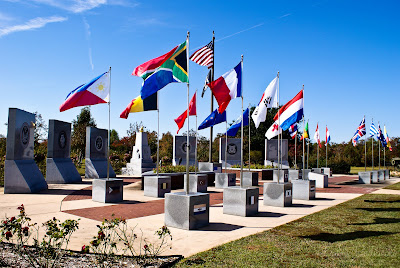 They had this statue as a tribute to America’s War Dogs. The plaque states what an important role dogs have had in America’s wars; protecting the servicemen and sometimes dying for them, working with military personnel on missions, and many other jobs throughout the branches. It was pretty neat to read because besides the K-9’s, I don’t think of dogs as involved much in the military. Not so! 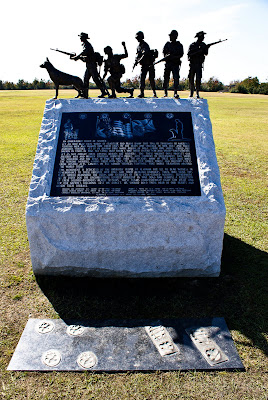 Here is the Vietnam Memorial, well part of it anyway. There is a wall with a quote on it, along the lines of stating that unless you were there, no one can understand what the Vietnam War was like. The last line of it said ‘and even we don’t understand it.’ It was written by a Vietnam Vet. Pretty eerie. I stood by this memorial for a long time, picturing what it was like for all those soldiers, Marines, and Sailors to come back to a country who [for the most part] viewed them as killers. Today, the military is held in pretty high regard, across the board. There are some who may not view it so highly, but overall, there is a lot of support for the branches, even if there is not as much support for the work they are doing, and those who make those decisions. But back then, they came home to nothing but scorn and isolation… I can’t imagine the heartache. And that is after fighting a nasty, messy, terrifying war where many of them saw things that no horror movie can match. How could you deal with those images and memories with no where to turn? The aftermath of that is still being played out in VA centers and hospitals around the country with people permanently affected by the effects of the Vietnam war, and coming back to nothing; no support/help/resources. I’m so [selfishly] thankful it is a different world and a different time now, for our current vets. But I pray for those who weren’t so lucky. 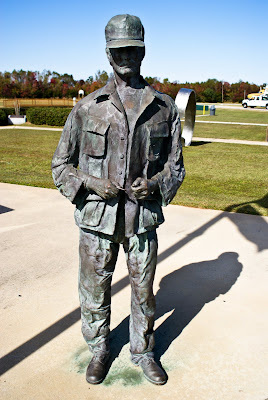 When I read this, my heart sinks a bit. THEIR WAR IS NOT OVER. 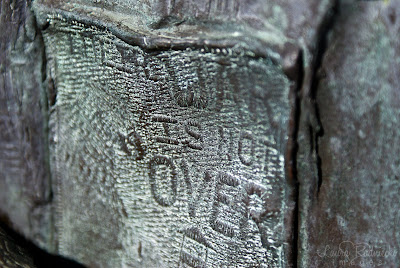 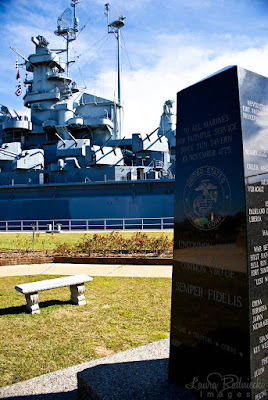 Here begins the tour of the inside. I don’t know what all of the photos are of, exactly. But what I do know, I’ll dictate. 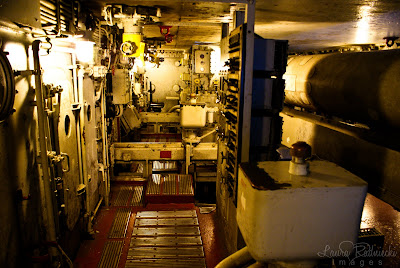 The view of the front of the ship. Those big silver guns could shoot projectiles 21 miles accurately. That’s a LONG, LONG WAY to shoot a bullet/canonball/whatever these are specifically called. They could do some serious damage. 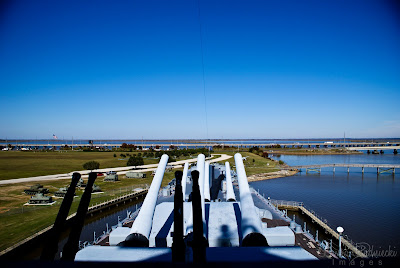 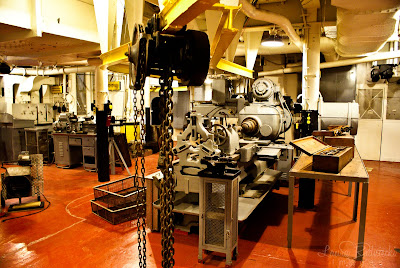 The huge cauldrons that took up one wall of the kitchen. They had to feed 2,500 men 3 times a day, so 7,500 meals had to be prepared each day here. 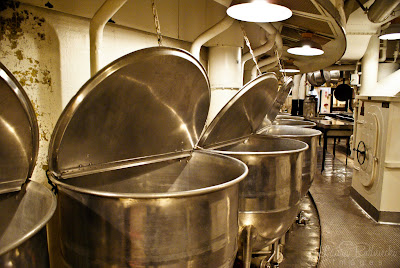 One part of the mess hall. 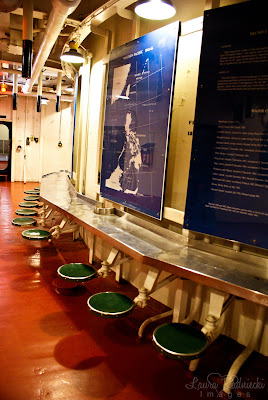 An example of the menu. The Sailors couldn’t be picky [I wouldn’t have done so well there…] 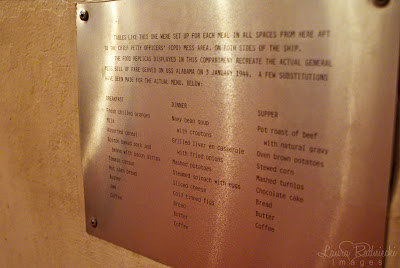 Enlisted sleeping quarters. If I had to sleep here, all I would be doing is laying awake at night thinking 1 – I HOPE that these chains don’t break [if I was on the middle or bottom, that is haha] and 2 – Who is snoring/farting/stinks/grinds their teeth etc etc etc. Can you imagine the noise and the smells from that many hard-working Sailors living at sea? That’s an image… 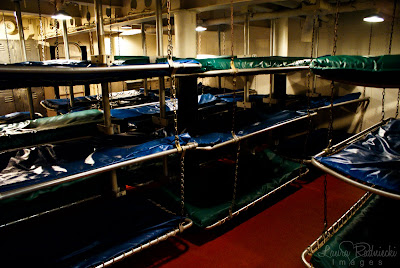 The supply store, and examples of what they could buy. Pretty neat! 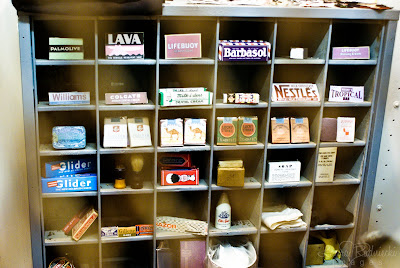 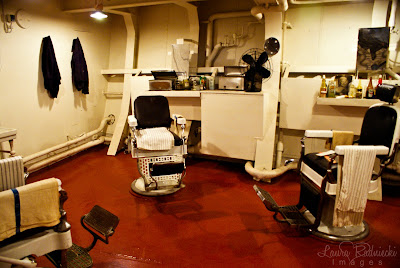 Here’s where my girlishness kicked in. This is the bathroom. No curtains/doors. Just a huge trough running along each long wall and a seat between each set of small dividing walls. So if someone was in the stall to the far left, closest to where I was standing taking the photo, and someone else was in the stall on the right, at the same end, they’d be staring each other in the face when they … did their business. Awkward… If that isn’t exactly how they worked, someone who’s been on a ship [Emily Espey’s husband??], let me know. I couldn’t bring myself to photograph the inside of a stall because I was running in the opposite direction as fast as I could. Sorry for the lack of an image to illustate this more completely. Haha. 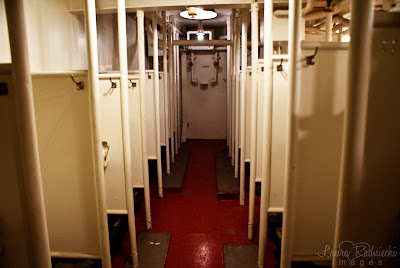 Ok, back to really neat stuff. This is the room where the major decisions and plan of actions were made. This secret intelligence room, or something like that. It made me feel like I was trespassing to even look in. 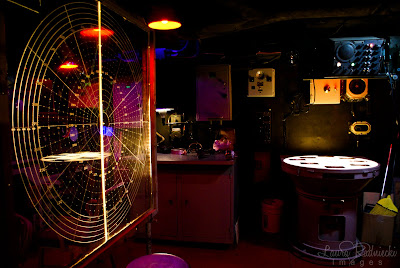 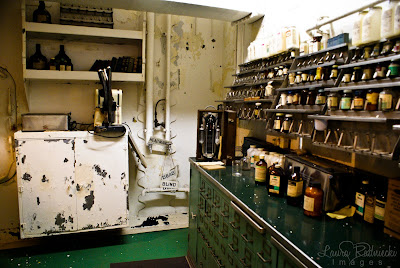 I thought this was fascinating: that a ship could have such a complete system of medicine onboard. But it really was a floating city headed to battle, so they had to be prepared for anything. 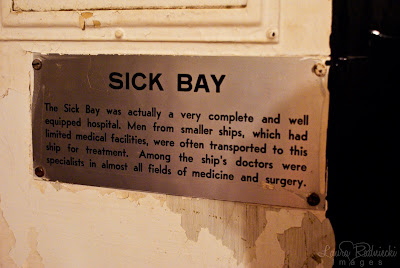 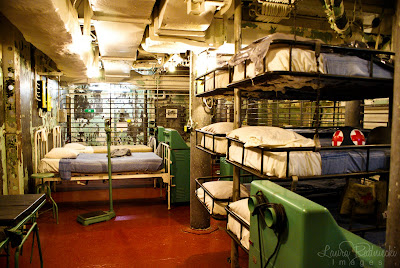 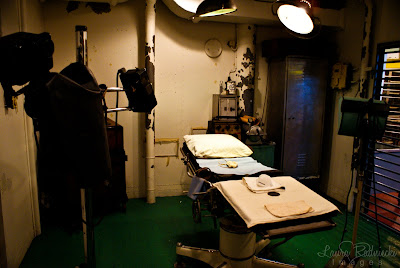 From the USS Alabama, we moved into the airplane hanger. Inside were a bunch of different aircrafts as well as other exibits. This was one that caught my eye. The plaque on the left of the photo explains that this model was made by a 4th grader. She wanted to honor the Alabama veterans of the current war, especially those who had lost their lives in the fight, and this is what the end result was. I had to stop photographing because I couldn’t see through my misted eyes. 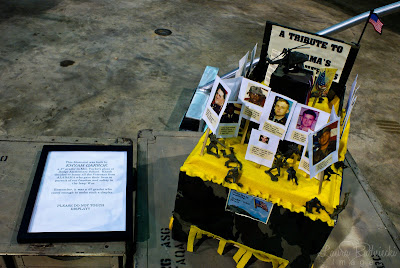 An amazing aircraft that was used to spy. It was created in a way that made it almost invisible to radar detection. 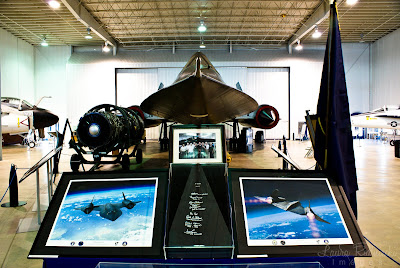 We toured the USS Drum after finishing with the airplane hanger. This is a look down the hallway that runs from the front of the submarine to the back. 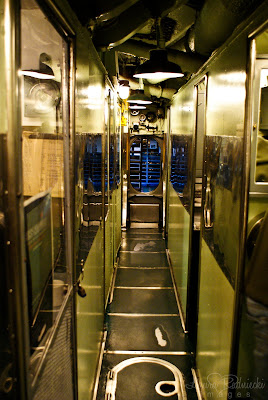 This is the doorway between the different sections. All connected by the big [not really very big though] hallway. 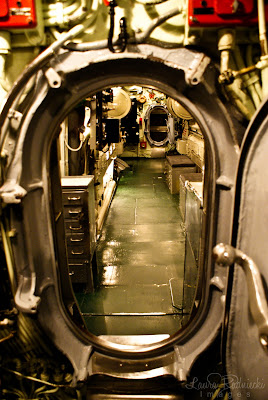 At one of the ends of the submarine. 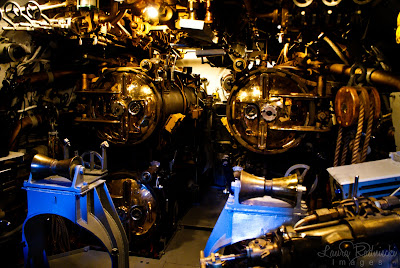 That is all for the day at the USS Alabama Battleship Memorial Park. What a day it was. Now back to the present: we spent the day walking the streets of Havana, FL. It was listed in the ‘Points of Interest’ pages of our hotel’s in-room informational pamphlete last night [SUCH a good idea for hotels to do.] We drove only 12 miles from our hotel and ended up at this little town of 1,700 people with a lovely historic disctrict. It was deadly on my pocketbook. [Not really, but it so could have been.] 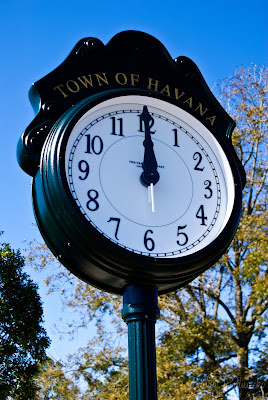 One particular shop has this canine companion laying right infront of the door when we walked up. That made it impossible to walk in without stopping to pet him. [SMART DOG!] He layed there for the 20-30 minutes that I perused the shop, and then when Matt came in, the dog ran straight to him and plopped down infront of him, ready for a serious scratch. Again… smart. dog. 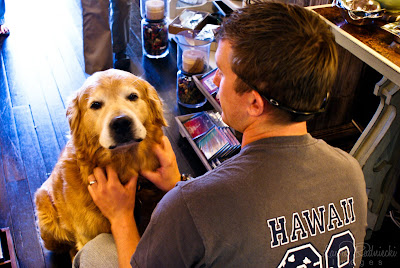 If you get the chance to go to Havana, FL – Do It. You’ll spend a few hours walking through lovely shops and there are a few great cafes to check out. We ate at one called the MockingBird and had really yummy chicken salad sandwhiches. Then we headed out in search of a few other points of interest that I wanted to hit on the way to our next stop.
Well… our sense of direction was a little rattled today and needless to say we couldn’t find/missed both of our points of interest. In the end, we decided to skip the plans and headed to Lake City to find the hotel we wanted to stay in [traveling is SO much easier when you have a book of the major cities in FL and a few hotels in each, complete with PRICES.] I connected with my aunt and we are going to head to Winter Haven tomorrow to meet up with them. That’ll give us a chance to do some laundry, to catch up with family, to be in the same place for a few days, and to have a break from hotel life. I believe a plan is made for Sunday to go shell hunting at a beach on the Gulf coast. I’m excited. 🙂 It’ll be nice to be around some family!
Thanks for sticking with me through these posts, I know that I can be pretty wordy at times. 🙂 Anyone who knows me from my years in school know that real well, I’m sure. I’m glad you choose to take a few minutes to follow our journey.
Guess what… only a week until Thanksgiving. Ohh yeahhhh. 🙂
Love and faith,
Laura

Previous Post: « USS Alabama and life as a WWII Sailor
Next Post: Self Teaching Achieves Success in Photography »