What a day! A rollercoaster day, one of the best on the trip. I [still] haven’t uploaded any photos off of my DSLR for days/weeks, but I DID upload a few photos from my Poing & Shoot, and although these are raw, unedited photos, I thought my posts needed a little color and photographical oomph to boost the words. Hopefully this makes it easier to read and easier to picture what the day was like.

I threw in a photo from Las Vegas, of us outside Circus Circus as we headed out to walk the strip. We are quite the duo because when we head out, we are usually carrying the P&S because it allows us to easily take the arm-out photos of ourselves, instead of having to flag down a passerby and get them to take one for us. Then I have my Sony around my neck, and sometimes, Matt is carrying the Canon as well. Never want to miss a moment! 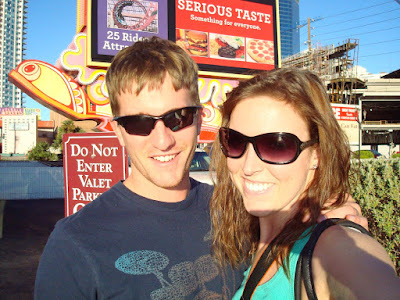 This photo is from Meteor Crater in Arizona, taken by our great tour guide. I forgot her name, but she knew her facts and she led a great tour. Plus, she takes some sweet photos too! It is hard/impossible to capture the essense of the crater with one photo. I didn’t have the time to do a panoramic, and I don’t own a fisheye lens, so this will have to do. Just imagine this crater stretching far in each direction, beyond the edge of the photo. 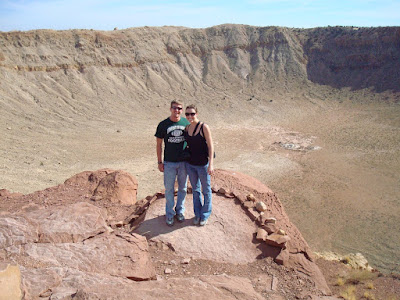 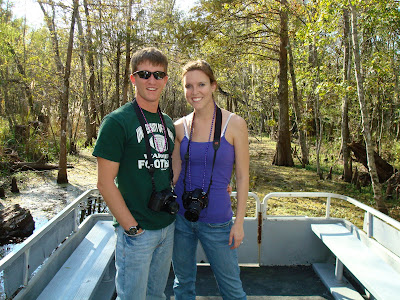 After the tour, Cap’n started to talk about the alligators they had caught this year and had in the aquarium. He proceeded to pull out a 7 week old alligator from the cage and show him to us. I am not sure the specific reason, but he said they catch a few [they had 2] and keep them until they grow to be about 3 years old and then they release them into the bayou again. Then they’ll catch some more babies. This little guy looked fake to me! They have teeth that will draw blood; like little needles Cap’n said. But they are too young enough to do much damage. As long as you hold onto the tail and don’t squeeze their bellies too hard, they’re fine. Apparently, alligators like to be scratched under the chin, [like dogs!] and when Cap’n did this to the little guy, he started to close his eyes! Just like a dog does when they’re being pampered. So neat. Here’s a picture of me, holding the little guy. Cap’n was still holding the tail, so I can’t take all the credit, but still. This was a big step for me! 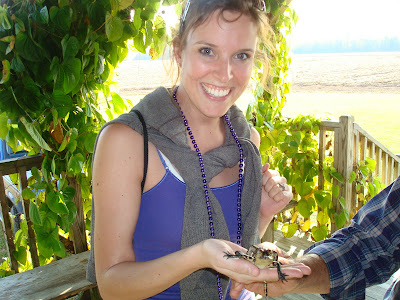 Now here is my brave husband. Holding the alligator all. on. his. own! So brave. And SO COOL! What a day. 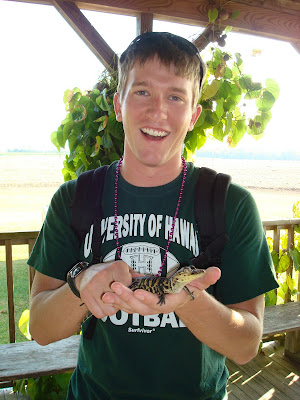 So, it was definitely a TOP 5 day. Actually, I think that this and Moab, Utah [Arches Ntnl Park] are tied as my top 2 favorite things. BUT, I don’t want to discredit everything else we’ve done, so I’ll only say it once. Well, a few more times than that, because I said it on facebook too, oops haha.

If anyone goes to souther Louisiana and wants to tour a swamp, please, google Munson’s Swamp Tour. They do a fantastic job and are so nice. I think Matt and I are now their biggest fans.

We are now in Gulfport, Mississippi and hoping to outrun the rain storm that is coming this way. No hurricanes, I don’t think… but a front is coming this way. I grabbed a few brochures from our hotel for Mississippi and also Mobile, Alabama, so hopefully we’ll find some things to do and see for the next few days. We are moving on to Florida, in order to be in Winter Haven for Thanksgiving with my aunt and uncle!

Go Vikings, facebook tells me that we won today. Oh, and I have never seen a place more in love with their football team than in Louisiana. There is Saints [and LSU] stuff EVERYWHERE! I think that people in Texas might come close with their Cowboy garb, but still… we heard songs on the radio today about the Saints and the town was DEAD during the game today. I believe they won though, so that’s good!

Alright, the hubs is getting on my case because he’s bored and wants me to put the computer down. Must comply! Thanksgiving is on the way!