I grew up doing a lot of camping. Tent camping. My parents took my sister and I camping when we were babies and we continued this tradition until we got into high school and college, and life got really busy. All of those childhood camping trips usually had 2 other families with us; my dad’s sister and family, and my dad’s brother and family – and the big group of us would go to different campgrounds all over the state. We have tons of memories, funny stories, and some horror stories of those trips. Some of my favorites include when a little 3 year old me put a toasted marshmallow on a camping chair, and my aunt sat on it. When she went to sleep that night, she brought that marshmallow with her into her sleeping bag. Oops! Another story involves a mishap with a little kiddie toilet inside one of the tents. Jessy and I are sorry for that one, Joe! 🙂 How about the marshmallow that was on fire that went flying in the direction of my uncles nose? Ohhhh, we had so many adventures on those trips. Rock climbing, picking blue berries, bike rides, s’mores, tin foil dinners, my uncle’s famous bacon and eggs breakfast. As life got busy when we grew older, those camping trips were harder to plan and then they eventually stopped happening.

This past winter, my sister and I were talking and we decided we wanted to go to Jay Cooke again. That was our favorite campground and we thought it was about time to start a new family tradition. I am married now and so is my sister, so the 6 of us including my parents were going to visit Jay Cooke again. It was decided! We picked the weekend, I blocked it off as reserved, and then waiting for it to arrive.

Suddenly, it was the Wednesday before and I hadn’t packed a thing. I think I had forgotten how to camp! When we were little, we didn’t have to do anything except put our clothes in a bag and bring it out to the pile to be loaded into the car. Now, we had to take the initiative to pack our own stuff, to buy some of our own food and to all around get ready to leave for the weekend. I was a little rusty as I tried to remember what I might need. I didn’t check the forecast but my mom mentioned it might rain, so to bring layers and a raincoat. Check!

On Friday, I drove to my parent’s house and loaded my gear into the van. Then, I did what I used to do, and slept on the drive up. Old habits die hard, I guess! My sister and Tony weren’t going to be able to join us until later in the evening, once Tony’s work day was over. Matt was called to a mandatory muster for the Marine Corps in North Dakota so he wasn’t going to be able to join us until Saturday night. Better late than never. When we pulled into Jay Cooke, I felt myself remembering pulling into the same parking lot all those trips before. We found our site and started the unpacking and setting up process.

Isn’t my bike a dandy? I like the 3″ foam seat cover I have on it. The plastic bag was to keep the seat dry in case of rain, because that foam seat would soak up water like a giant sponge! I know, you’re jealous. 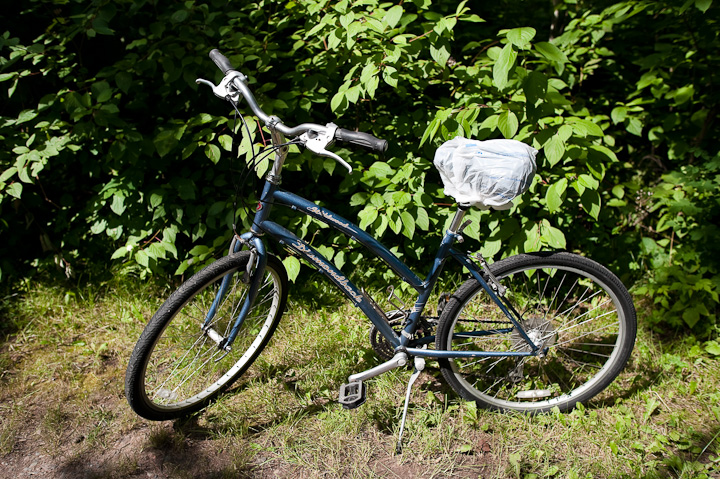 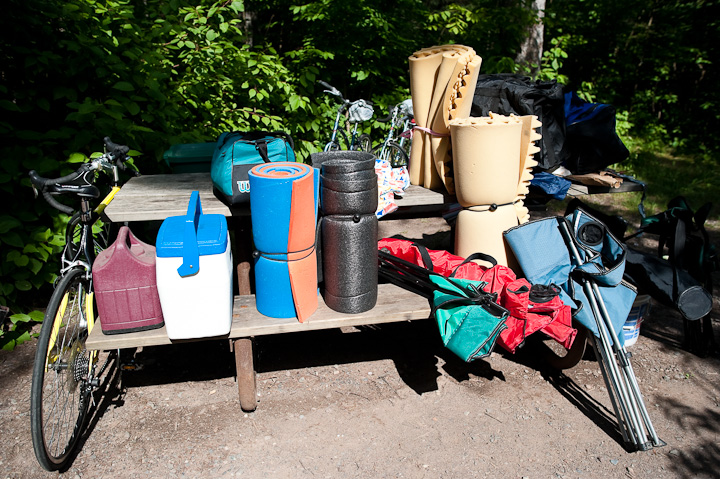 The forecast said that there was a high chance of rain. My mom suggested that she and my dad buy a big tarp to bring up and rig like a canopy over our table, giving us a dry place to be. My dad reluctantly agreed and then rigged it up in blue skies and sunshine. 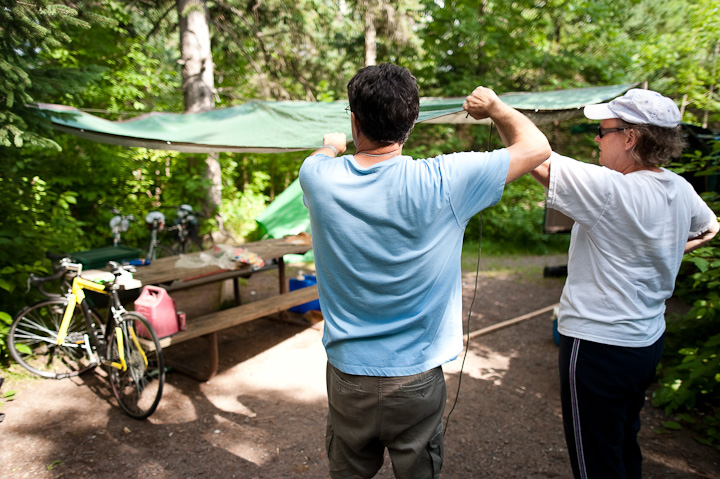 However, the clouds were billowing up in the distance and I started to think the forecast was going to be right. 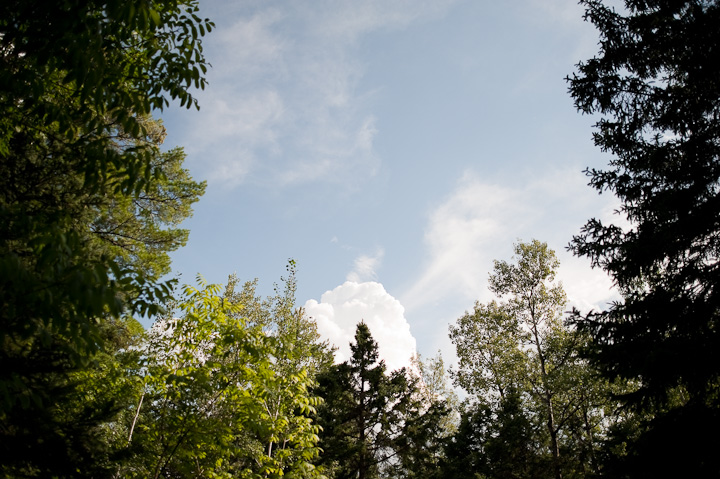 After setting up the tents and the canopy, we went down to the swinging bridge to check out the river. Just as I remembered it – root beer colored water, a slightly scary wiggly bridge and the shaky leg feeling if I look down. 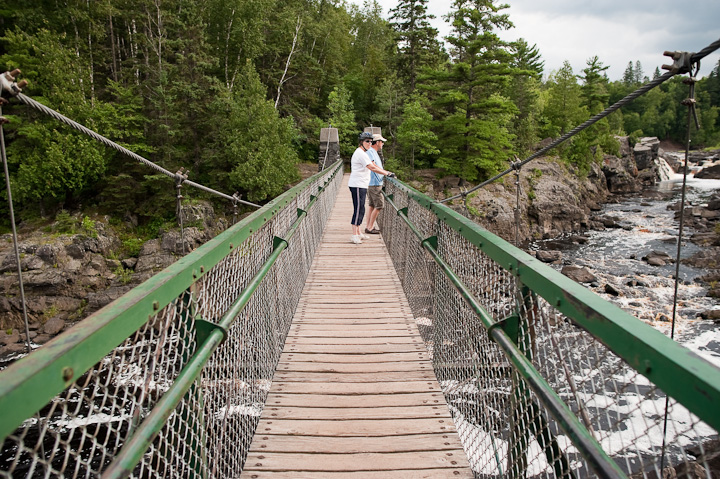 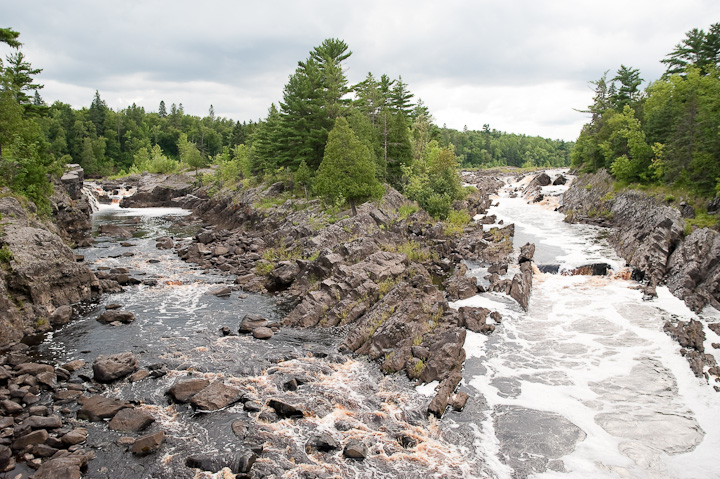 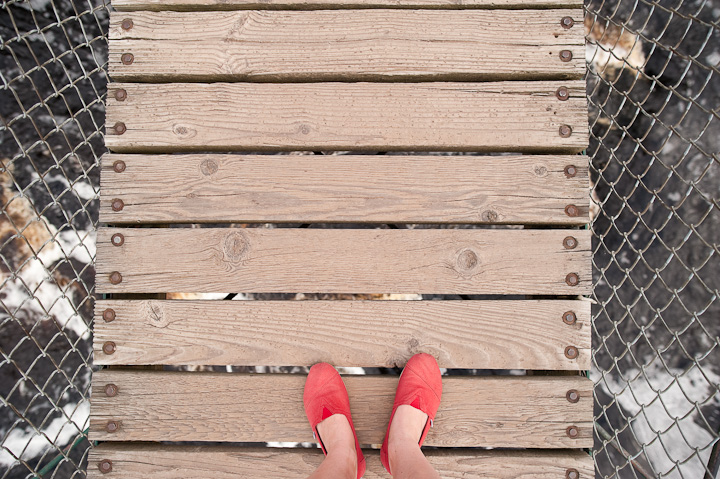 Then, the thunder started to rumble and the skies darkened. Pretty soon, it started to sprinkle and then downpour. We sought refuge under the canopy and watched the skies open up. The photo below is dad pushing up on the rain fly of the tent, and a HUGE pool of water sloshing over the side of the tent. He eventually lowered the corners of the rain fly so the rain wouldn’t collect there. 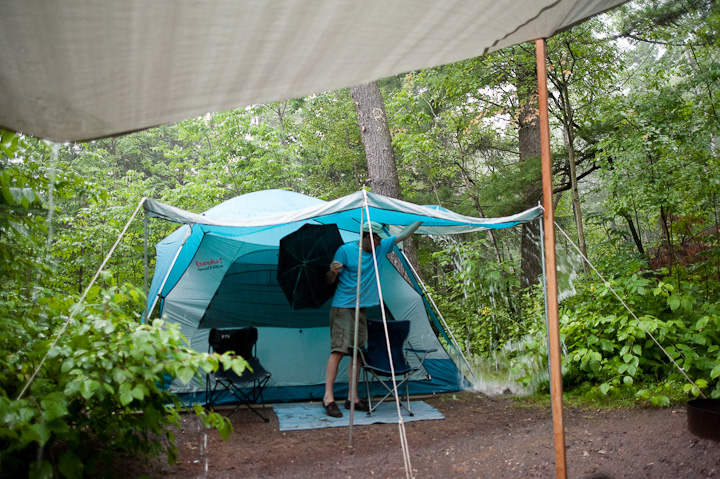 The next morning, the rain had stopped. We decided to go on a bike ride and stumbled upon these little guys in the process. These are the caterpillars that turn into Monarch butterflies! I don’t think I’ve ever seen one of these before in my life. We saw dozens! They were hanging out and eating the milkweed leaves. And dropping huge deposits in their wake. [See the one on the right end of the leaf the bigger guy is on? Gross.] 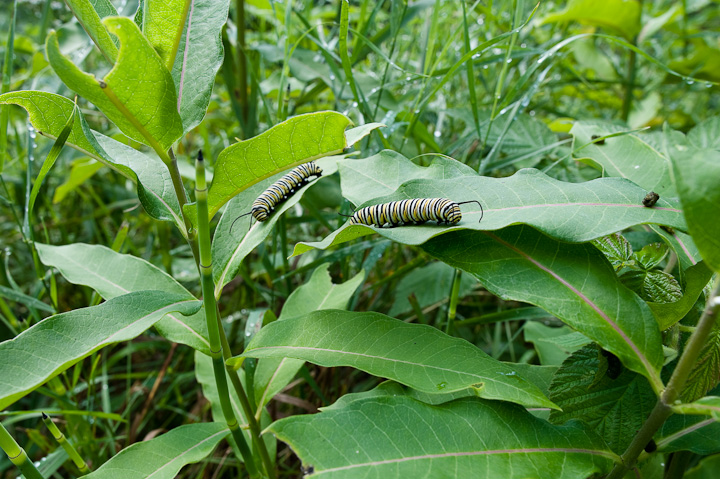 We went and checked out the river again, this time with Erica and Tony. Tony found this proposal message carved into the rock. It says ” Amanda Marry Me.” 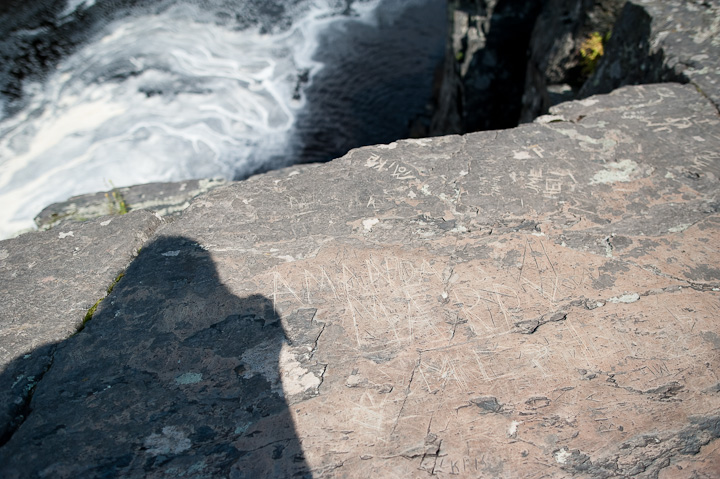 One of the major memorable things about Jay Cooke was the rock wall at the back of the campground. We would go up and down that rock wall no problem when we were younger. I don’t know if it’s that I have more fear now or the fact that my body mass to arm strength ratio is way more lopsided now, or maybe both – but it was not as easy to climb this time.
I made it up slowly. 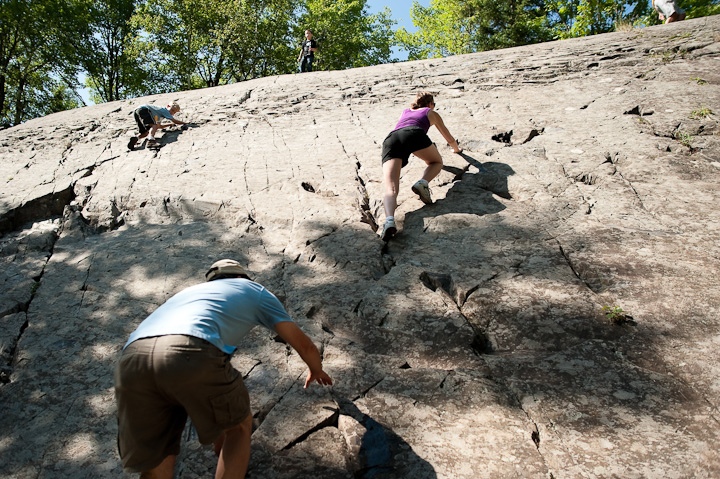 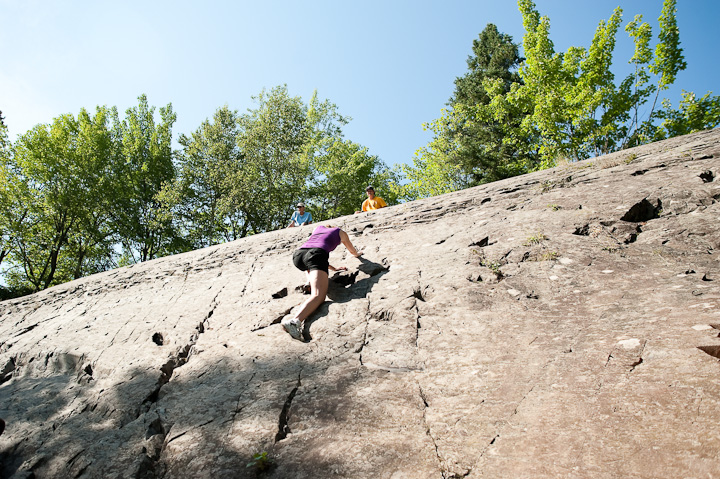 Apparently each one of us needed our own bag of chips at dinner. 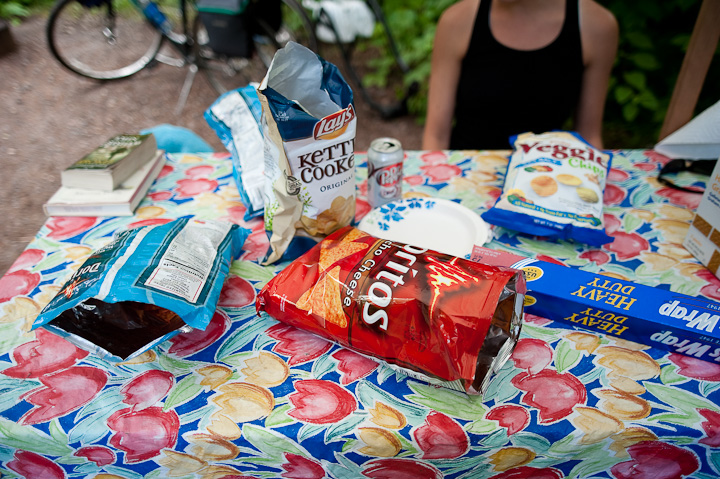 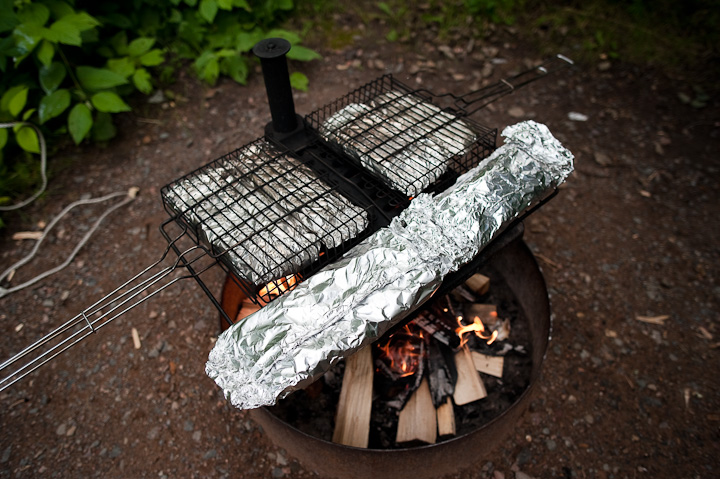 Matt joined us in the evening on Saturday, after he had spent 5+ hours driving from the North Dakota/Minnesota border all the way across to pretty near the Minnesota/Wisconsin border. 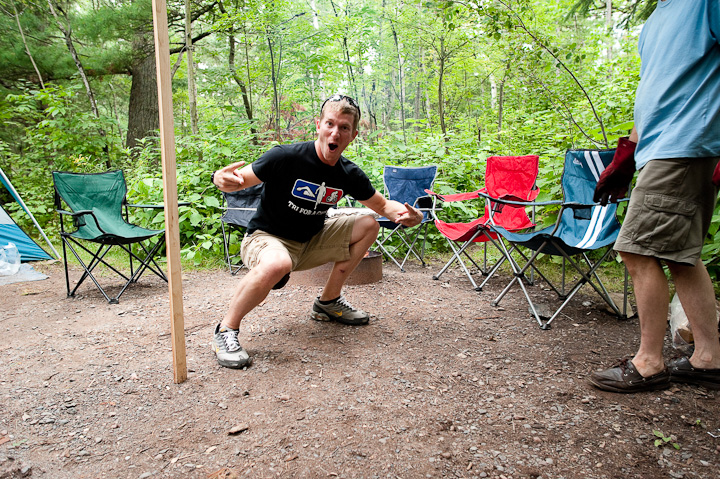 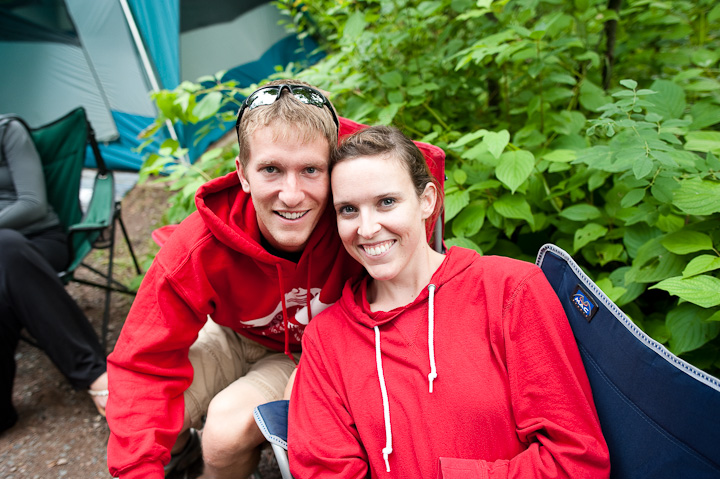 Thankfully, check out on Sunday wasn’t until 4pm. That meant that we had lots of time to go on a bike ride after church.
Matt and Erica are gearing up for a half ironman and are ridiculously fast bikers. Tony is a machine on rollerblades, and then there’s the rest of us. We went slowly and my dad and I got side tracked looked at spider webs and ant hills. This absolutely disgusting spider was creeping me OUT. I brought only my 28mm wide angle lens so this photo below was taken with the camera about 8 inches above the spider. I was basically holding the camera out at arms length, trying to get it close. Wrong lens to take photos of creepy crawly things with! When you are looking through the lens, the spider looks way far, far away. You forget that you are only 1-2 feet from it! Ewwwwww, moving on. 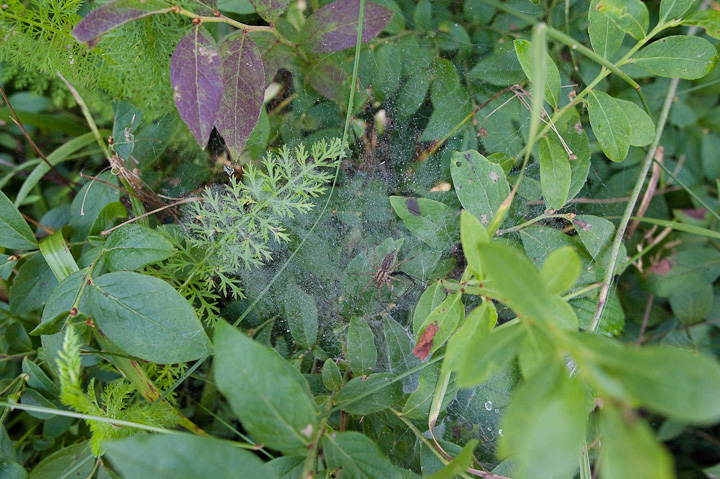 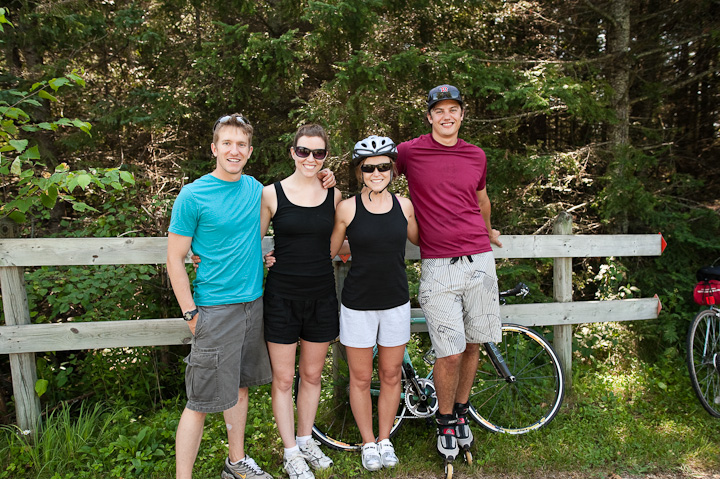 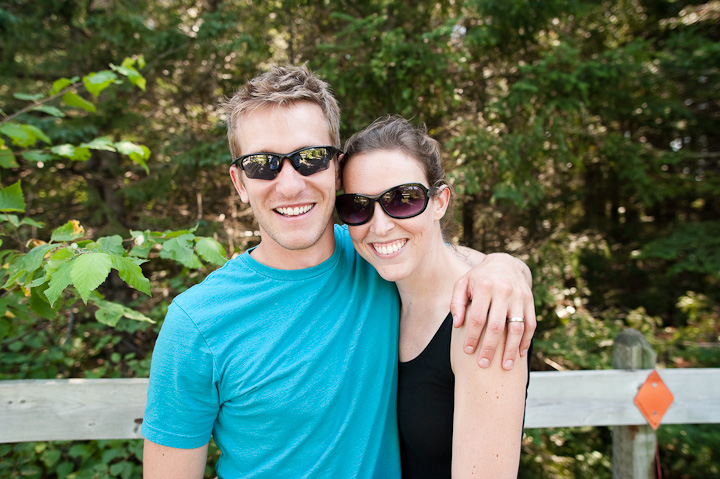 Then, after the bike ride and lunch, Matt wanted to check out the rock wall he’d been hearing so much about. He’s part billy goat and loves to climb anything. He made it to the top in no time, and then watched me climb because he didn’t believe I could do it.
Oh, I can do it. Just at my own slow pace.
I’m pretty sure that this is a yoga pose. Not a successful rock climbing pose. 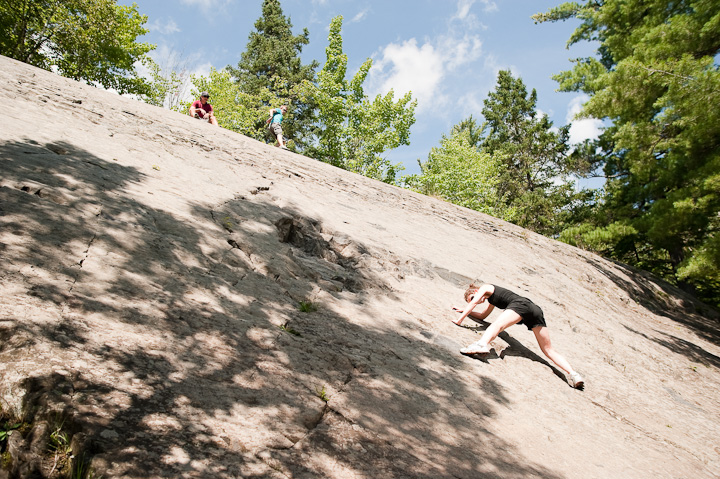 This is my attempt at staying close to the rock so my mom could take a picture of the two of us. Matt looks like he’s lounging at the beach. I look like I’m preparing for a massive fall. Either way, we’re still up there together! 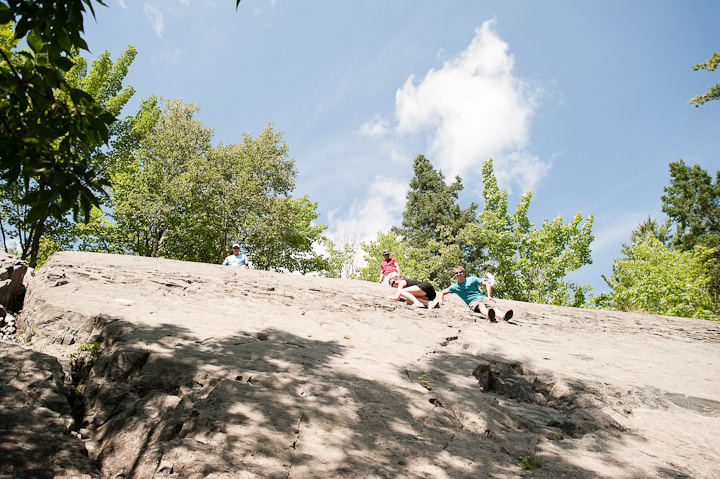 The trip was so fun, and I felt like we packed so many things and so much fun and relaxation into just 2 short days. I came home feeling like I’d been gone a week. That’s a sign of a quality vacation!
My hope is that we can make a point to come to Jay Cooke for a weekend again next summer. Now that we are older, I don’t think life is any less crazy. But maybe it’s that I want to make more of an effort to schedule these activities and trips into life. They are so important and so worth it!