When I was a junior in college, the nursing program strongly encourages all of us students to try to get an internship for the summer. I applied to the hospital in my town, and was asking to pick the floor I’d like to work on. I picked Family Birth Place, and was ‘hired’ – for the summer, as the summer intern on FBP. I was assigned to a preceptor, which meant I would basically work every shift that she worked, and I’d just shadow/work with her and learn the ropes of a Labor & Deliver / Pediatrics nurse.

The day came for me to meet my preceptor, and the nurse manager from FBP introduced me to Sara. When she walked into the room, I was introduced to a 20-something girl, who in a lot of ways, looked like me. Well, rather, I looked like her, since she’s the older of us two.

We have the same build, kind of the same face shape, and both have freckles. We got along right off the bat, and I knew I was in for a great summer.

Sara was in the middle of planning her wedding, and actually got married that summer, during my time working with her. I too was planning my wedding, which took place that winter. We talked about details, plans and wedding stressed while we worked. One evening, Sara asked if I wanted to see a picture of her dress. I’d bought mine the summer before, and hello – I’m a girl, of COURSE I wanted to see her wedding dress. She brought out a stack of photos from her purse and handed them to me. I took one look at the stack and said ‘NO WAY. Sara – I bought the same wedding dress.’

No kidding. Both of us got the Ivory version too.

I think the reason we both loved it so much was that it was perfect for our body type. Because we’re of similar build, it fit both of us well.

I swear, it was like we were the same person sometimes.

Anyway, fast forward 3 years, and I’m not working on FBP. Sara and I have kept in touch on Facebook and have met periodically for lunch to catch up. The last time we were able to meet up was before I moved to Hawaii. In 2009. So today, we finally were able to align our schedules and meet up for lunch.

It was just like old times, we were chatting away a mile a minute the second we stepped out of our cars. After the waitress came to take our orders once and we hadn’t even opened them, we both stopped talking for 2 minutes to scan the menus to pick out or choices. We chose in silence and the waitress came back.

Sara gave her order. I said, “Are you kidding me? I’ll have the same thing.”

We both ordered the Hawaiian Chicken Sandwhich.

I swear, sometimes, it’s creepily like looking in a mirror with Sara. But in the best creepy way possible.

Oh, and I need to write another post, just on Sara’s husband Mike, aka “Monster” Mike Schultz. Google him. He was an accomplished Moto/Snocross rider who had a devastating accident in Dec 2008, resulting in an above the knee amputation of his left leg. In the 2 years since, Sara and Mike have faces the challenges head on, and this year, Mike received a gold medal in both the Winter and Summer X games in adaptive Sno and Motocross. [Did I get all those dates and details right, Sara?] Their story is an inspiration, and now, Mike has designed and build his own knee, so that he can race. They are starting a company to build knees for other active amputees. Amazing, right?

That’s why Sara and my lunch lasted 2.5 hours today. Trying to catch up on 2 years of happenings [BIG happenings at that] is just not possible in one lunch date. More to come. 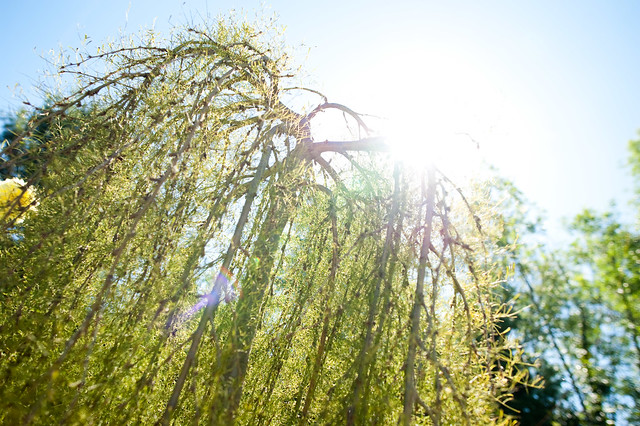