August 2005 was a month that etched itself into American history with one storm surge. Hurricane Katrina left the Gulf coast in shambles and things will truly never be the same. Living in Minnesota, my interactions with Katrina were limited to radio, TV and internet. The only person I know that was directly involved was my friend Quinn, who went to help with the clean up effort with her college.. I didn’t know anyone who lived there, who’s house was damages, who lost anything. I was sad for all those affected, I prayed for them, and I watched the news with a heavy heart.

But I didn’t really get it. I didn’t comprehend the extent of it all. I don’t think that I am unique in this; I think that when a disaster happens half way around the world and people’s lives are devastatedly changed, we mourn for them, but we don’t really even grasp a sliver of what it is like. It’s a sad reality, because if we could just relate a little bit, I think that the generosity of people would be so greatly improved; more people would donate funds, more would help out in the relief… more good would be done in the aftermath.
I got my first actual interaction with the effects of Katrina last night and today. 4 years and a few months later.
Yesterday, Matt and I drove from southern Louisiana through New Orleans into Mississippi, stopping in Gulfport for the night. We stayed on the highway, but from that vantage point, I saw devastation that still remained four years later. Buildings with only the framing of the walls left. Roofs sunken in. Buildings abandoned. Matt saw a sign with distinctive markings on the poles where the water level reached. It was atleast three feet above ground. Imagine three feet of water rushing in your house. Can you even picture it? I can’t. I don’t think anyone could really picture it until it happened. And even then, they couldn’t believe it was really happening. 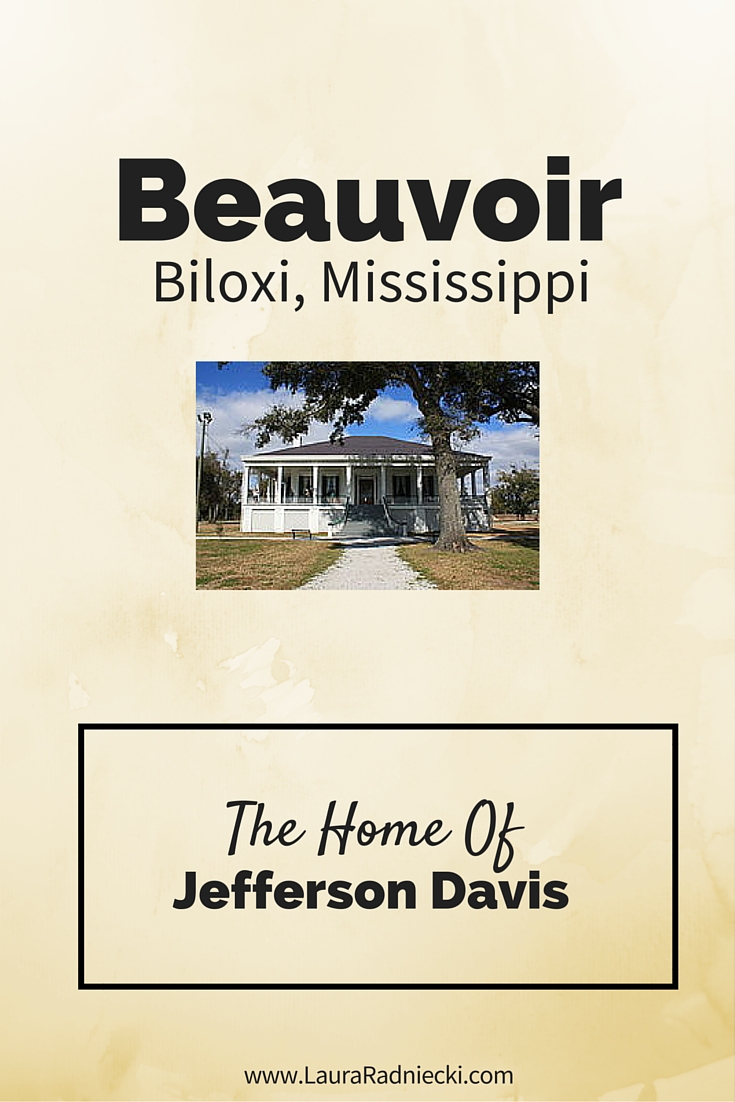 Today, we went to Beauvoir, the home of the only president of the Confederacy. It is a huge home on a large estate, with lots of artifacts in the house. I had a brochure for it that I picked up at a hotel. I realize now that this brochure was printed PRE Katrina. The brochure talks about rose gardens and many smaller buildings including guest quarters and carpenter quarters around the property. It mentioned a Jefferson Davis Presidential Library… We decided to go and tour this estate today. Keep in mind that this is in Biloxi, Mississippi; roughly 60-75 miles east of New Orleans. Now I’m from the midwest, and like I said – I knew nobody that was directly affected by Katrina. I was [sad to say] preoccupied with my life when Katrina hit; Matt was getting ready to leave for boot camp and I was starting my sophomore year of college. I didn’t watch much news coverage and I didn’t read the newspaper much. I only heard the snippits. I never really associated Katrina with affecting other places besides New Orleans. I didn’t think of the fact that other places were badly hit too, Biloxi and Mississippi’s Gulf Coast included. That was a wakeup call for both Matt and I today.
We got to the estate and paid the admission fees. We were directed to the front porch of the house and waited for our tour guide. Shortly after, we were met by a lady who proceeded to tell us all about the house and its inhabitants for the next thirty minutes. The house was badly hit by Katrina. A foot of water came into the house, and the winds came into the house which put pressure upwards, and they almost lost the entire roof. The entire front porch, along with the huge columns, were entirely ripped off. The first floor of the Presidential Library was ruined. They had to tear the building down in the aftermath. Perhaps the worst part of it all was that ALL of the artifacts were in some shape or form damaged in the storm. In the years since Katrina, massive efforts have been conducted to restore this building, as it is one of the National Historic sites. They have had the pieces restored and they have been reintroduced to the house as recently as 10 days ago. That means that nonstop for the last four years, they have been working to restore this house. That’s amazing to me. A harp was the piece that was added only 10 days ago.
The estate included the house, a restored guest house, a cemetery where many Confederate veterans and their wives are buried, the sun dial the marking the middle of the former first lady of the Confederacy, and the ruins of several other buildings. It was really neat to visit and experience. We saw pieces of china that were destroyed in the hurricane. We saw a replica of the first lady’s engagement ring [the original is in the Smithsonian]; the ring was recovered by one of the relief workers who was sifting through the debris of the library 6 months after the hurricane. How amazing that a ring smaller than a quarter was saved.
But anyway… I could go on all day. If you are in Biloxi, Mississippi, take the tour of Beauvoir. It is worth your time! One couple that was on our tour with us had been there before, but pre-Katrina. They were there now to see how it was afterwards. I thought that was both really neat and kind of eerie too.
Now, we are settled into a hotel in the town of Daphne, Alabama. We have several flies of things to do in Mobile and in Daphne here, so we’ll see where tomorrow takes us. From here to Florida, we don’t have much planned out, so it’s basically whatever we run into!
Here is a photo if the Davis home, after Hurricane Katrina. I wish I would have taken a photo of it now, from the front… but I forgot. If you’re curious, I’m sure google would quickly show you a photo of it in its glory. 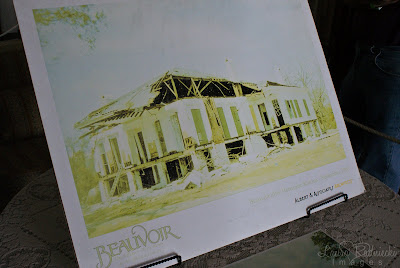 The arcitecture of the house is phenomenal. The details… The man who built the house was a very wealthy cotton plantation owner, so he wanted it to be very expensive looking. This is all hand-painted; restored to the quality and color that it was when it was originally painted. The corners in the entertaining rooms actually had rounded corners. The corners of the walls were rounded, as where the joints where the walls met the ceiling. Imagine the detail and time needed to make them actually rounded. 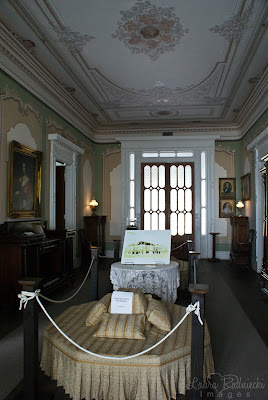 Here is their family living room. The desk in the center was with Jefferson Davis through all of his time in the public political eye. It moved with him, wherever he went. 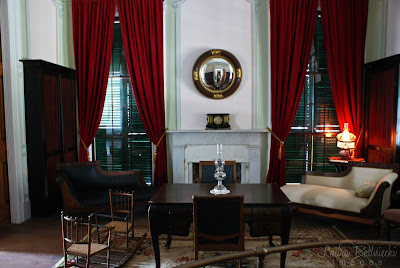 The Confederate Soldiers Cemetery – Veterans and their wives are buried here. 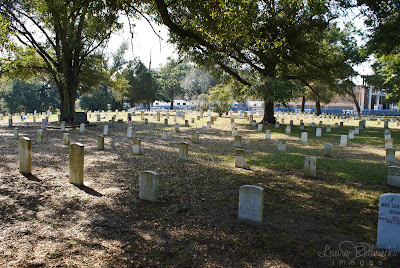 This is the tomb of the unknown Confederate Soldier. Eerie. 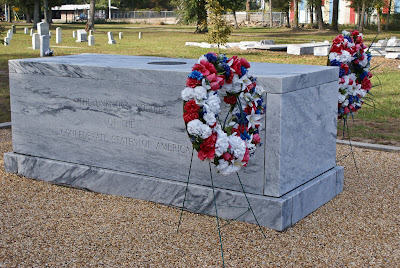 Samuel Davis is the father of Jefferson Davis, the first and only president of the Confederacy. Samuel was a soldier in the Revolutionary War. That is so amazing to me, that he fought that long ago. 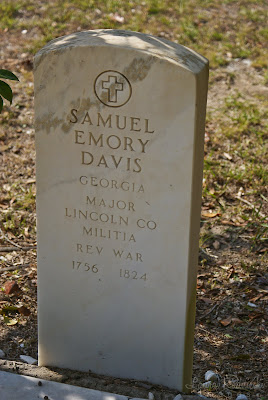 It was a pretty amazing day. Makes time kind of slow down to step back in time and see what it was like back then. Plus, to get a glimpse into the aftermath of Katrina.

Today, I am thankful for the blessing in my life, and for the relief that people offered those who needed it in the time after Katrina hit. It is only with the help of others that people can survive and overcome disasters like that. I’ll say one thing for certain: the coast is full of people with a fighting spirit. Instead of flea to a safer area, lots of people decided to take control and not let nature control their lives. They fought back, rebuilt their homes and their lives, and are still there today. That is true strength. I think that I would probably be miles and miles away from the water if I had been through it all. But I guess that’s only speculation because again… I wasn’t there. I don’t really get it, no matter how much I try to.

Maybe tonight we could offer up a prayer for the survivors of Katrina and those who are still trying to rebuild their lives. Because even though it’s been over 4 years, the rebuilding continues…