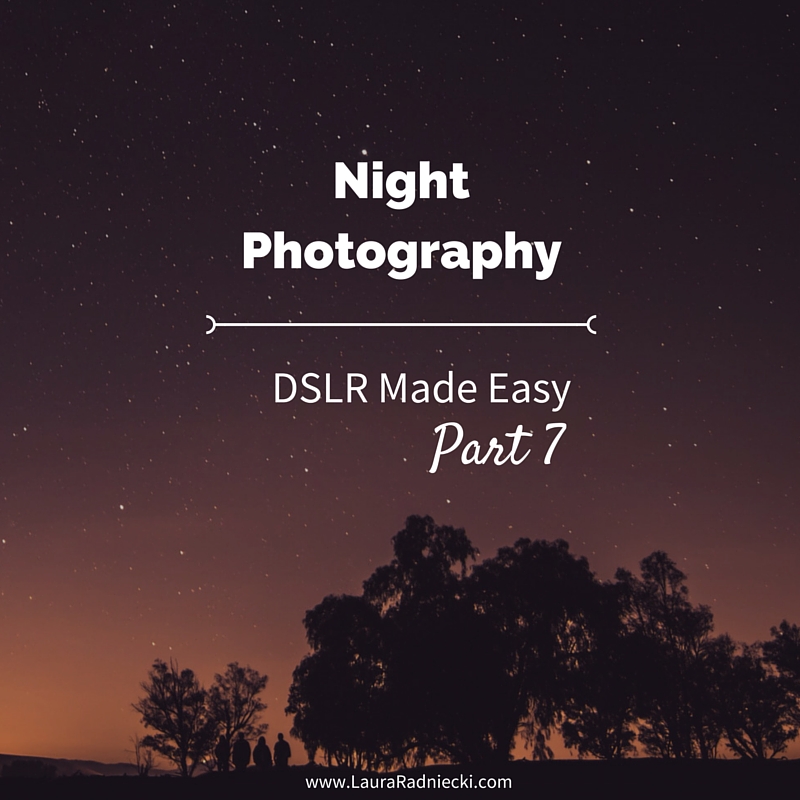 Someone suggested a tutorial idea to me the other day: Secrets to Shooting at Night. She said she had been out photographing at night and had gotten horrible glare.

I’m not an expert on this topic.

I do, however, have a tip or two that I’ve learned the hard way. I have tried to photograph things at night and have been royally disappointed. Just last month though, I realized one of my main mistakes and remedied it.

I’ve taken photos at night and I have my camera set to spot meter.

[If you don’t know how to set your camera to this, you should get out your camera book and look it up. I use spot metering all the time, because I want whatever the focus of my photo to be properly exposed. There are several settings for how your camera will meter; one being the entire scene. Your camera basically takes an average of everything in the viewfinder when determining the exposure settings. I like to use spot meter because often, there’s a big difference between the sky and the subject of my picture – say a person or a tree. I want to be able to point the exact middle of my viewfinder at my subject and judge my exposure from that. If I let the camera take an average, I’d have a harder time knowing my subject is going to be properly exposed, and things like silhouettes would be more difficult to achieve. But that said, check with your camera manual for more of an explanation.]

So anyway, I have it set to spot meter. For example – in Hawaii, there was a night where Matt and I were driving home and noticed the moon was huge and beautiful, hanging over the ocean. I decided I wanted to try to take some moon photos. We walked down to the beach with my tripod and I set it up on the sidewalk. There were some trees with scraggly branches between me and the moon, and I thought their silhouette would look really neat. So, I set up the tripod, turned the camera on, and pointed the middle spot of my viewfinder at the moon. Now there’s a huge difference between the brightness of the moon and the blackness of the sky around it.

That said, the camera was telling me that I needed to have a slow shutter speed to let in light because it was pitch black outside. I tried several photos with different lengths of shutter speeds, all over a second though [that’s what the tripod was for!]. Some of them turned out ok, but I was noticing a huge reflective blob of light in the photo. I had no clue what it was, or how to make it go away. I tried to google it but “what is the blog of light in my moon photos” doesn’t exactly bring about clear and concise results. 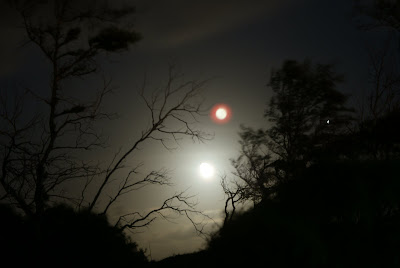 I remedied this by using the clone/heal tools in Photoshop Elements to blot the blob out. 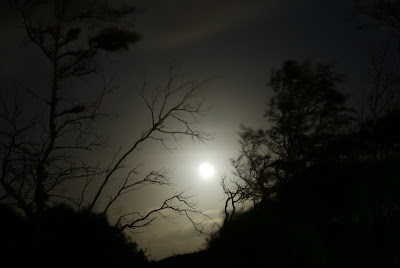 In Vegas, Matt and I were watching the Bellagio’s light show, and I had this same reflective thing happen. I was setting my exposure based on my camera’s light meter, and I would get glowing lights and the reflective blob. This time, it was in the shape of the words on top of the Bellagio hotel. 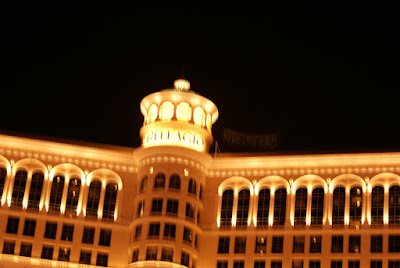 [This next photo was taken with a faster shutter speed. This decreased the amount of light let in, and got rid of the reflection. It also got rid of the blur in the first photo – due to the slow shutter speed. I was on to the solution to reflective light blobs here, in October, but I didn’t realize it for a couple more months.] 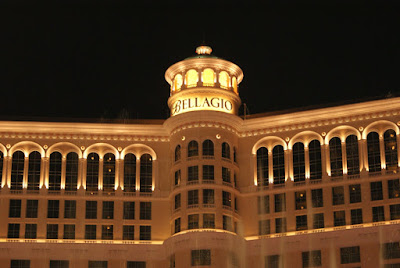 Back in Minnesota a month or two later, the moon was a bold orange color one night. I had Matt pull over because I happened to have my DSLR with me at the time. I got out, and started to take photos of the moon. The sky was pitch black and the moon bright. I pointed the camera at the moon and manipulated the shutter speed until the camera told me that it was at an exposure of 0 – or properly exposed.

[For detailed explanations of aperture, shutter speed, exposure, and the exposure meter, refer to the DSLR Made Easy early post links up at the top of this post.]

When I took the photo of the moon, you couldn’t see any of the craters or other details that I could see with my naked eye. It was an orange/yellow blob in a black sky. 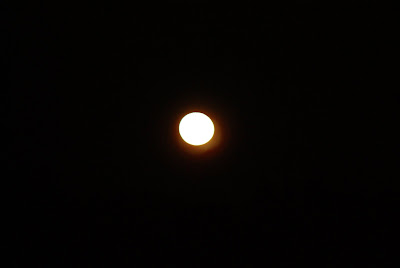 So I had a brilliant idea – I made the shutter speed faster [decreasing the light allowed into the camera]. My exposure meter started to flash, telling me “Laura, your photo is going to be way too dark!” I ignored this, and took a photo. It was better than before, but the moon was still glowing a little too brightly. Everything else – total blackness. 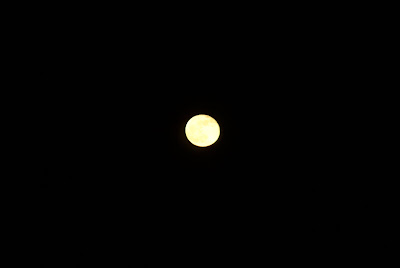 I made the shutter speed even faster, and took another photo. This time – I could see the craters!!!! My exposure meter thought I was delusional, but in this case, the moon was emitting so much light against the blackness of the sky that in order for me to see the detail of the moon and not have it be reflecting, I needed to only let a tiny bit of light in. See?? 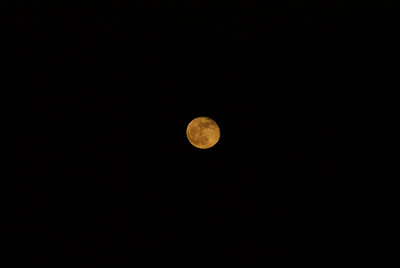 Other things to incorporate into your night photography are: using a tripod and play with your ISO. You can bump up your ISO some, to combat having little to no light.

Also, don’t be afraid to take photos of moving objects, at night. One of my most favorite nights spent in Waikiki was not too long after getting my tripod. Matt and I set on the curb of Ala Moana and I set up my camera on the tripod. I tested out the effects of slow shutter speeds on passing vehicles. I got a couple keepers of The Bus, and one of a motorcycle rider, along with some curious looks by passing people. It was fun!! 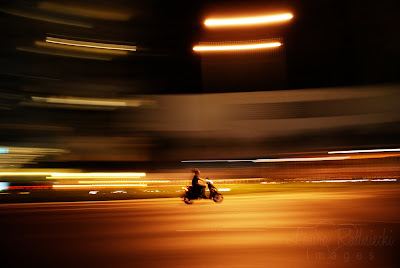 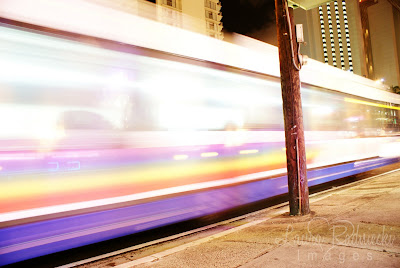 Great photos can come from unlikely places. Get out and experiment! You’ll be happy you did! 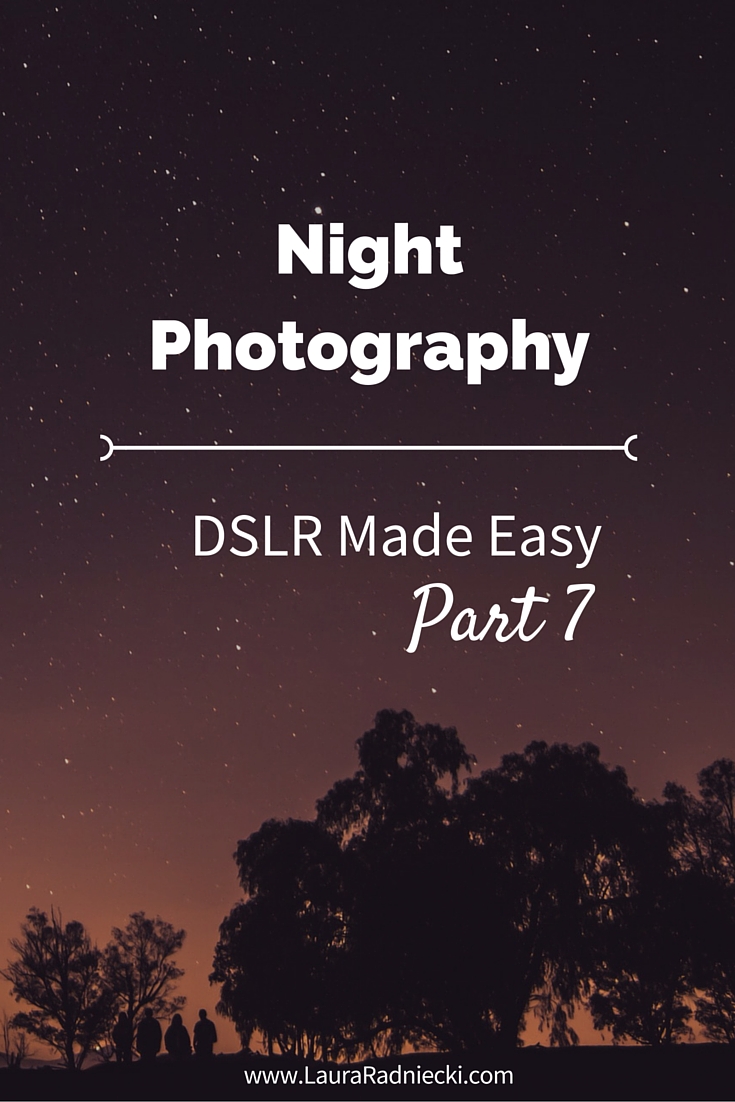 The next part of the DSLR Made Easy photography series is Part 8: Basic Photo Editing.