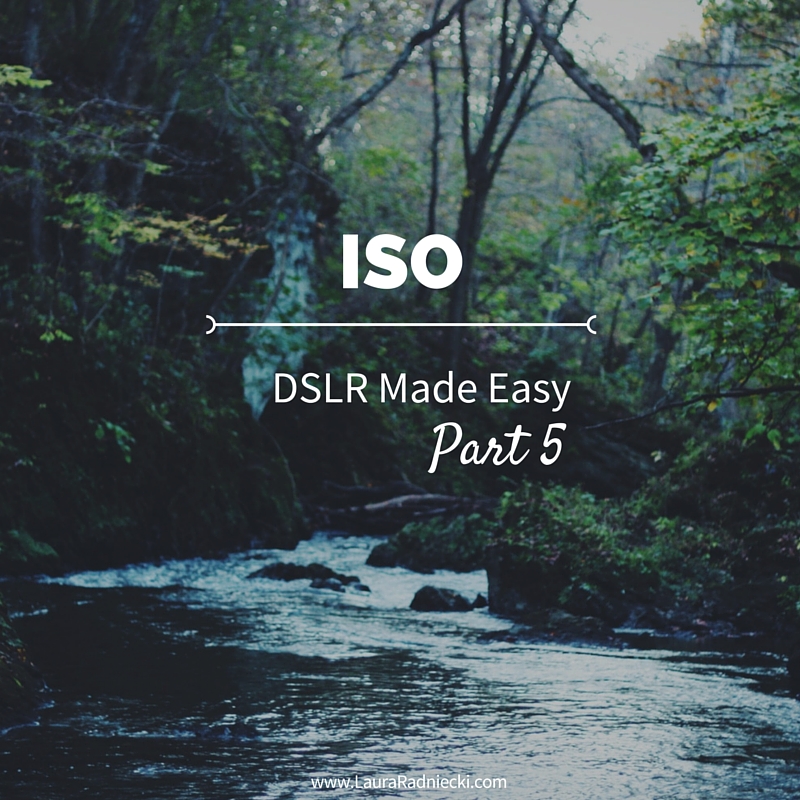 Now, there is another aspect that can affect all of the other parts we’ve talked about so far.

My P&S has an ISO setting but it wasn’t until I bought my DSLR that I figured out what it meant.

ISO has to do with how sensitive your camera is to light.

Low ISO means your camera is at about normal sensitivity to light. Low ISO is best for bright/sunny days.

High ISO means that your camera becomes more sensitive to light. You can use High ISO when there isn’t much light available.

ISO ties into the days when we used film. If you think back, you might remember that the packages for 100 film [which is actually 100 ISO film] were designated for Outdoor photos only. The 200 film was for Indoor/Outdoor. 400 film was for action shoots, and 800 film was for low light/night photography.

That is because of how sensitive that film was to light. ISO 100 film wasn’t very sensitive to light, so it was best for outdoors when there was a lot of light available. ISO 800 was really sensitive to light so it was necessary for taking pictures at night or in low light. If you tried to use ISO 100 at night, your photos would be pitch black. You had to use whatever fit the situations you were shooting in.

That brings us to ISO today.

If you are shooting at 100 ISO, your camera isn’t very sensitive to light. This doesn’t matter if you are outside because the conditions outside are usually always bright.

However, if you are inside, ISO becomes more important.

Say that you are in your living room and you are trying to take a picture of your baby. Your room is pretty dim, so when you set your aperture as low [letting in as much light as possible] as you can, you set it to f/3.5. Then, watching the exposure meter marker inside your camera, you fiddle with it until you see it hovering around 0. The shutter speed needed for it to be at 0 or perfectly exposed, is 1/15. 1/15th of a second. For most people, 1/15th of a second is pretty slow and you can easily get some blur. Not just from your own hands holding the camera, but your baby is probably going to wiggle and kick during that 1/15th of a second. It might seem like a short amount of time, but do some experimenting. It only takes one tiny, tiny bit of movement before you’ll see a whole blur in your photo instead of your cute baby’s face.

So what do you do? You can’t use the 1/15th shutter speed to get a good picture, and your aperture is as low as it can go in your lens. You can’t make it go any lower to let in any more light.

You raise your ISO. Try going to ISO 200. That makes your camera a little bit more sensitive to light. Now, when you fiddle with the shutter speed dial, you see that when it hits the 0 mark, the shutter speed needed is 1/25. You have made the necessary shutter speed go from 1/15th of a second to 1/25th of a second. Still pretty slow but that is faster than the previous, and will give you less blur.

Try going up to ISO 400 now. When you fiddle with the shutter speed, and put it on 0, you see that your shutter speed value is now 1/50th of a second. Try taking a picture now. Did you get a good one? Probably! You still have to really try to hold still during the photo, and you might have to try to get a few in a row so that if your baby wiggles, you will get at least one clear one, but 1/50th of a second is much easier to get a good photo with, than 1/15th.

ISO sounds great, right? It is a great tool to use in low light situations.

But there’s a negative to it too. ISO increases the image noise. [Note – don’t be like me and think this means actual, audio noise. I was reading my manual and kept reading ‘image noise’. I was like ‘what the heck, how does the image make noise? Maybe the camera starts to make grinding noises or something…’. Wrong.]

Noise means pixely, splotchy, unclear images. I know, that makes it sound horrible, but it’s not always horrible. Once you’ve seen image noise, you’ll understand what I mean, and you’ll never forget what it is.

Turn your camera to A-priority mode and make sure your ISO is set to 100. Take a picture. Then turn the ISO up to 800 and take another picture. Turn it up as high as it can go [mine is 3200] and take a picture.

Can you see the difference? The kind of splotchy quality? That is image noise. 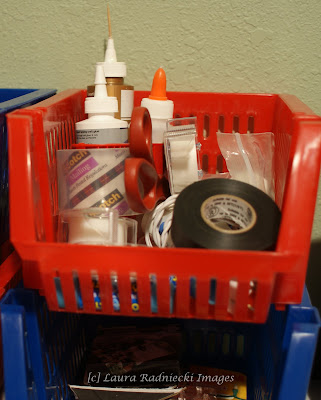 [Here is an experiment to show you the effects of ISO. This photo is taken with the ISO set at 100.] 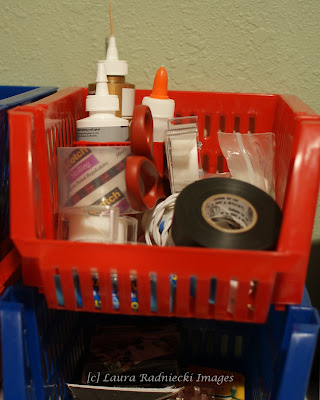 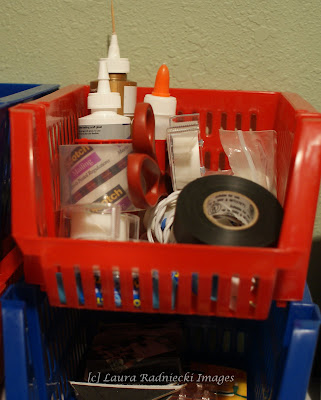 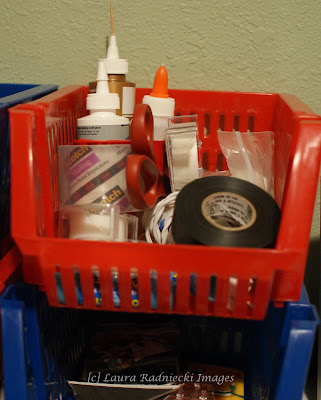 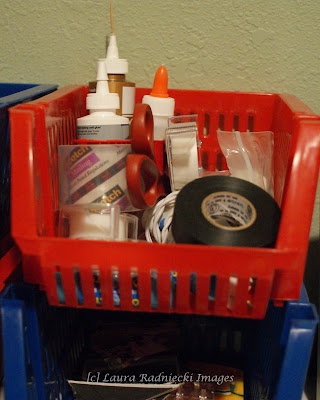 [ISO 1600. You’ll notice the increased splotchy-ness around the Scotch Tape roll. And on the blue plastic of the crate.] 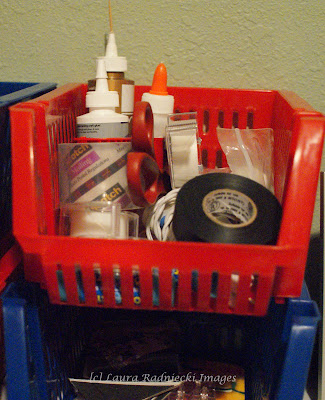 Some noise can be ok. In the case with taking photos of your baby in the living room: you’d rather have some image noise and get a picture where you can actually see your baby’s face, than use ISO 100 and get a huge blur of a face as they turn their head at the moment you press the shutter button. Sometimes, you can’t see image noise unless you zoom in.

My rule of thumb, at least on my current camera, is that I can use up to ISO 400 pretty decently. If I absolutely need to, ISO 800 can work, but the photos are pretty noisy. Anything above that is not too good.

Some cameras are better with image noise than others. Try out your camera to see what you think. 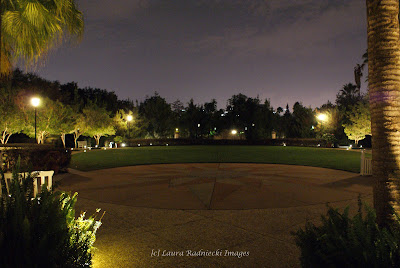 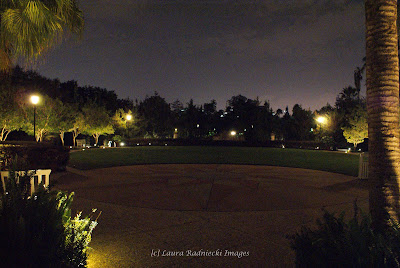 [… has the ISO set at 3200, my max. As you can see, the photo is very, very grainy. It isn’t blurry, because I was able to hold it still enough during the photo [shutter speed was fast enough to reduce blur], but it is very noisy. In this situation though, the alternative to bumping up the ISO and getting a noisy photo is not getting a photo at all. If I wouldn’t have bumped the ISO up, I would have had one massive blob of colors from the lights and my own hands shaking, with black around it from the night sky. I wish I would have taken one for comparison but this was in Universal Studios in Florida and at the time, I wasn’t thinking about writing up a photography tutorial… I was waiting on a boat to take us to the City Walk! Ahhh, vacation.]
So, if you are in a situation where you can’t seem to be able to get a good photo because there’s not enough light to get the settings right, try to bump up the ISO. It might save you.
You could use your flash too, but there are a lot of professional photographers that HATE, and I mean HAATTEEEE using a flash, especially the pop up flash that comes on the DSLR. The light is bright and harsh and artificial looking, they say. It blows out the subject of the photo, whether that be faces or flowers, and makes very harsh shadows appear. They’d rather have image noise and a natural coloration in their image than use the flash. That is up to you and your personal taste though. Just know that ISO can be a friend of yours, if you use it wisely.
Well!
Now you know the basics of Aperture, Shutter Speed, how the two make up Exposure, and you know about ISO. 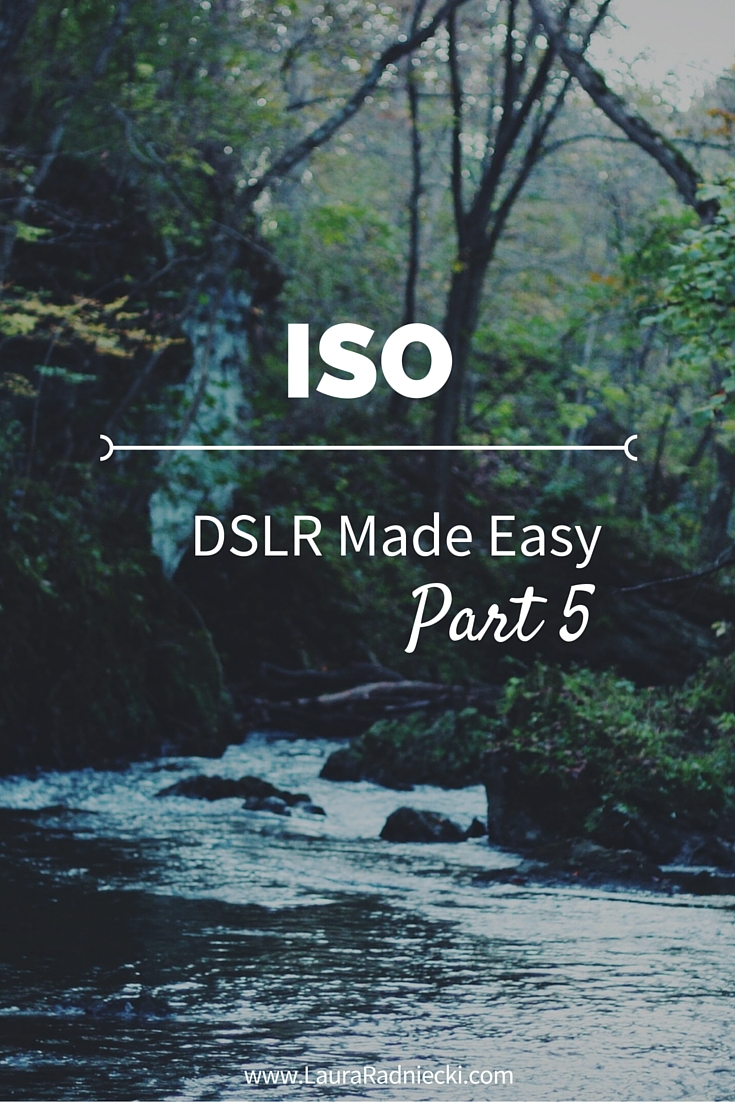 My plan is to write up another post or two, about the Rule of Thirds and about the basics behind creating a silhouette. That’s something I finally learned once I put the pieces together about metering and about manual settings. Some really neat photos can be taken when silhouettes are involved.

Get out there and play around with your camera! See what you can do with it!

Up next is Part 6 in the DSLR Made Easy Series: Silhouettes, Metering and Rule of Thirds