If you’re new to the DSLR Made Easy Series, here are the previous posts:

Today, we’re talking about Part 3 of the DSLR Made Easy series:

Shutter Speed is the length of time that the shutter takes to snap your photo.

Light is let in while the shutter is open, so a faster shutter speed lets in less light than a slower shutter speed does. Also, another factor involved with shutter speed is camera shake or blur. Basically, it is the shakiness/blurriness that is a natural part of each of us. We can’t be perfectly still, no matter how hard we try. That’s what tripods are for. A slow shutter speed lets the shutter remain open for longer, and this increases the chance that we might wiggle and that movement will be shown in the photo.

More on that in a minute.

Shutter speed is measured in portions of a second so sometimes that can get confusing. If you’re looking around online and you see something that makes it look like the shutter speed reading is 200, that means it is 1/200 of a second. Not 200 seconds. The maximum shutter speed [meaning SLOWEST or longest] that I’ve noticed on my camera is I think… 10 or 15 seconds. Maybe even 30 seconds. Nothing beyond that though.

The basics to shutter speed are this:

On the flip side, there is not much time to let the nature shakiness of humans affect the photo. I might be a really wobbly photographer, but if the shutter speed is set at 1/500, the shutter is only open for 1/500th of a second, so my shakiness won’t be noticeable in the photo.

A slow shutter speed means that the shutter is open longer. This lets more light into the camera.

This also makes it easier for my shakiness to show up in the camera as blurriness. If the shutter speed is 1/15 which means it is 1/15th of a second, I have to try to hold really, really still for the whole 1/15th of a second and not move, otherwise, you’ll see the shakiness in my picture.

Usually, you will want to use the fastest shutter speed possible, for the lighting conditions you are in.

If you are outside in bright sunlight, you can use a very fast shutter speed. The sun gives off so much light, that your camera only needs to let the shutter speed be open for say 1/2000ths of a second to get what it needs. But, if you are inside your house, there is WAYYYYY less light there. If you look through the viewfinder of your camera when it is on auto, you’ll see the shutter speed setting change as you point it around. Point it at a window, watch what the numbers do. Point it at a dark closet, watch what the numbers do.

If you are taking a photo in a dark room, your camera is going to need to compensate for the darkness of the room by having a slow shutter speed. The benefit of this is that it will allow more light into your camera. But the negative aspect is that when you slow the shutter speed down, you are bound to get some of that shakiness, which is called camera blur. Due to your movement while taking the photo. If you are using a tripod and you don’t touch the camera while it’s taking the photo, you won’t have that blurriness, as long as whatever you are taking a photo of is completely still. [That WON’T happen if you are photographing kids. Or pets. Or anyone living and breathing. Well, maybe if they’re sleeping. 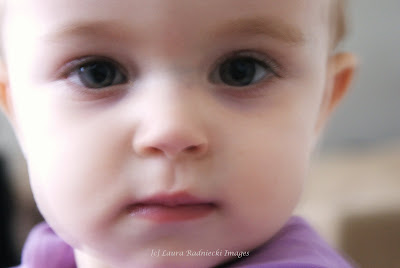 [This photo is an example of camera blur, due to needing too slow of a shutter speed indoors. The child held as still as possible, but she’s a kid! She can’t be perfectly still. Because the camera needed to hold it’s shutter open for less than 1/15th of a second to let in enough light, I got the blur in the photo. The solutions to this would be to either use a flash or to use the ISO, which will be covered in Part 5. Stay tuned!] 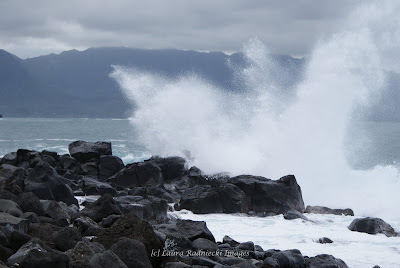 [This photo is taking using standard settings for outdoors. It has a moderately deep depth of field and a fast enough shutter speed to freeze some of the water droplets from the waves. The shutter speed was 1/640 of a second.] 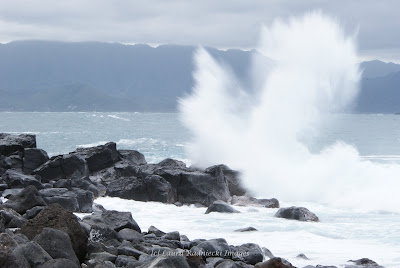 [Now this photo has the shutter speed slowed way down. Instead of the previous photo being set at 1/640th of a second, this photo has a shutter speed of 1/20th of a second. See how the wave seems to be blurred, soft, and you can almost feel the slow motion movement? That is created by the slowed shutter speed. The rocks are clear for the most part, so that means that I held the camera really still while taking the photo. The only movement came from the wave’s motion.]There are times when shutter speed can be used to achieve a desired effect in a photo. The most common one that I have seen is using a slow shutter speed to convey water movement. Take a waterfall for example. If you have your shutter speed set very fast, you may be able to capture individual water droplets falling. You’ll freeze the motion of the water.

If you set your settings to a slower shutter speed, the shutter will be open longer and you’ll have water movement in your photo. You’ll see the water ‘streaming’ down the waterfall. It will appear smooth and almost dreamy because the water was moving during the time you were taking the photo, so the water created the blur in your photo. If you held as still as you possibly could while taking the photo, then hopefully the rest of the picture [trees, leaves, or rocks that were around the waterfall] will be clear, making the blurred water look even better. That is where shutter speed can create neat effects. 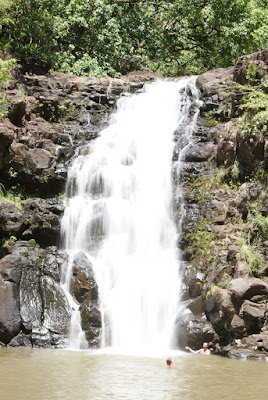 [This is the same waterfall, but this time, the shutter speed is slowed way down, to 1/6th of a second. The motion of the water is shown in the image.

Notice too though, how the photo is really bright. Too bright, really. This is because I slowed the shutter speed down to a setting that would show the blur of the water. This happened to be 1/6th. If I had put it on 1/15th or 1/20th etc, it wouldn’t have shown much blur. So, I’m letting in tons of light by slowing it to 1/6th of a second. My camera tries to compensate for all that light by making the aperture hole really, really small. As small as possible. But my camera lens can only make the f/number as big as f/36. Some fancy lenses can go as small as f/64. But since mine could only go as tiny of a hole as f/36, that still allowed too much light into the camera, which made the image really bright. If I had a fancy lens and could have made my aperture as small of a hole as f/64, then the photo wouldn’t have been so bright and would have been more properly exposed. Made sense?]

So Shutter Speed Priority mode [S mode or Tv mode on some cameras] functions like the A-Priority mode, but this time, you control the shutter speed only of your images.

You’ll select a shutter speed based on the conditions or the type of effect you want to achieve in your image and then your camera will pick an aperture setting that matched the shutter speed, in order to create the appropriate exposure for your image.

If you are outside in the sun and standing by a waterfall, you can set the shutter speed to 1/1000 to try to capture the water droplets as they fall, and your camera will probably pick an aperture setting of f/5.6 or something, in order to make an accurately exposed photo. [Fast shutter speed of 1/1000 doesn’t let in much light, so the big opening of the f/5.6 has to let lots of light.]

If you want to catch the water streaming down, you might set your shutter speed to 1/15 or 1/30 of a second. Your camera will pick an aperture setting of f/22 or higher. [Slow shutter speed lets in lots of light, so in order for the picture to not be one big blog of white blinding light, your camera will make the aperture opening really small, f/22 or f/26 etc, so that not much light is let in there.

There you have it. That is how things work in Shutter Speed Priority or S/Tv mode.

If you want to shoot with the A and S priority modes, you have all the knowledge you’ll need to do so. 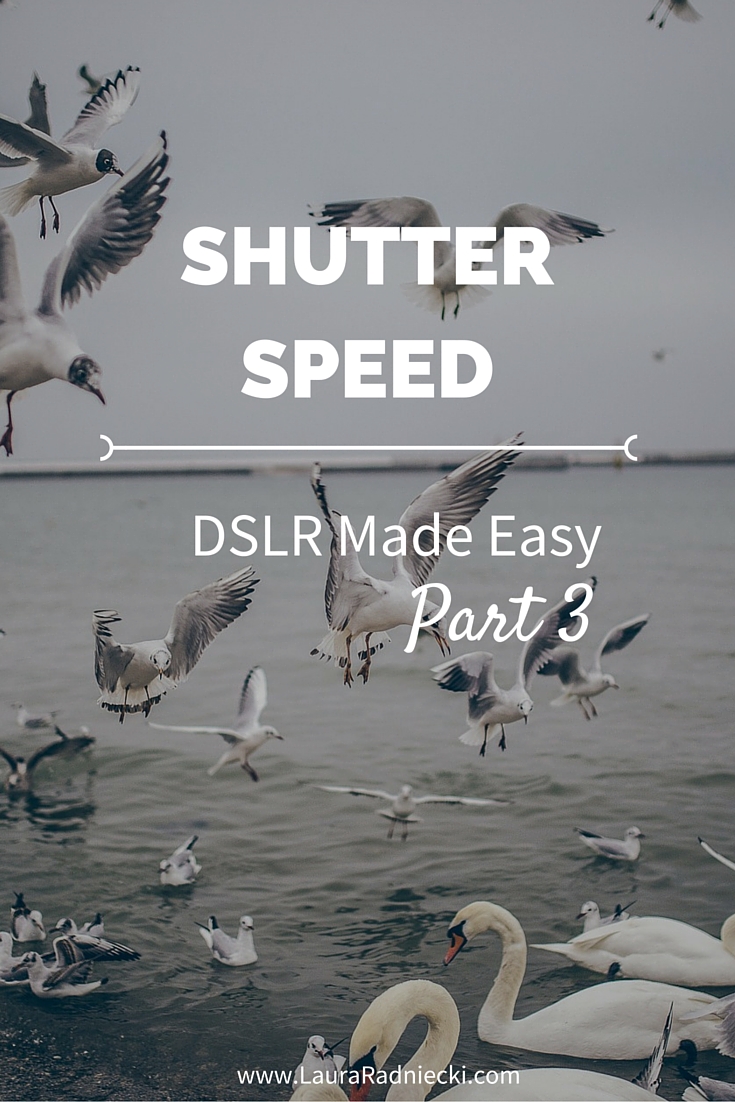 If you want to learn more, Part 4 will dive into Manual settings.If you are looking for more extensive photography information, take a look at the Love Your Camera E-book and Online Photography Course here.