If you’re new to this series, you can find Part 1: DSLR Cameras vs Point & Shoots here.

Today, we’re talking about Part 2 in the DSLR Made Easy Series: 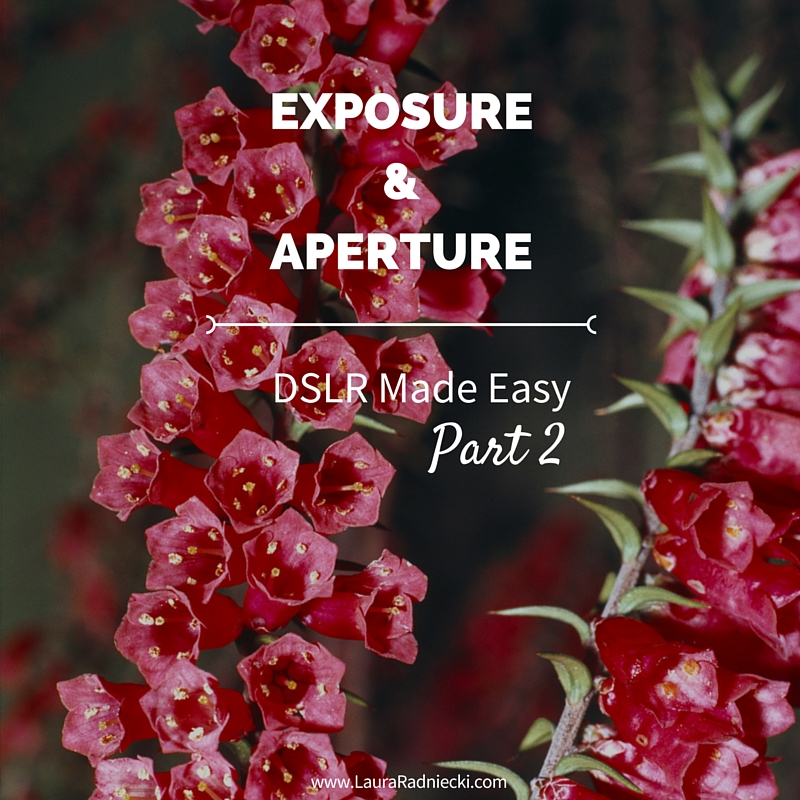 Let’s look at the terms that you need to know. Please be aware that when I bought my first DSLR, I took out the manual and started to read it and came across the word aperture. I said to myself, what the heck does that mean?

So I got my computer, opened up Google and typed in What is Aperture? That’s how I learned what I was doing, and there’s no shame in that. If this stuff seems like rocket science to you at first, it won’t after you think about it for a little while. Trust me. I’m living proof that you can go from not even knowing how to pronounce the word to understanding its function with only a little reading and some trial and error.

I’m going to be explaining these in my own words. Again, I’m not an all-knowing professional and I don’t have formal schooling, so if you disagree with my definition, then you might be right. If you need to correct me, that’s fine too. I’m just explaining based on what I know and apply to my own photography workflow.

Exposure is basically how your photo turns out. How bright it is, how much detail is in the photo, how clear it is. The final product of your image, dictated by how much light was allowed into the camera.

Exposure is made up of two different things: Aperture and Shutter Speed. Those two factors react together to create the exposure of your photo.

Aperture is kind of complex though, so bear with me while I try to explain it.

Aperture [the size of the hole allowing light in] is measured in f-stop numbers. Basically written like this f/x.x [example f/1.8 or f/5.6]. Here’s the tricky part: much like describing the gauge of an earring or a needle, the smaller the number, the bigger the opening.

Did you get that?

The smaller the number is, the bigger the opening is. So. An f/1.8 opening is much larger [lets more light in] than an f/8 opening.

Think about that before we go on. I had to pretty much draw up a diagram when I first read that online. I was like huh??? But basically, an f/1.8 is a huge opening [letting in tons of light] and an f/22 is a tiny opening [letting in very small amounts of light.] Each step in-between 1.8 and 22 would be increments between the huge hole at the 1.8 end and the small hole at the 22 end. Process this concept before you move onto the other aspect of aperture.

The bigger the aperture opening [the smaller the f/ number, exp. f/1.8] means that it has a SHALLOW depth of field. Only a small amount is going to be in focus and the rest will be blurred. Those photos taken where a child’s eyes are in focus while the rest of them gradually gets blurred until you can hardly see what is around them? While some of that might be a Photoshop application, a lot of that has to do with the aperture setting that was used. If you use a f/1.8 aperture, that means the hole is huge, it lets tons of light in, and then you have a very shallow depth of field, so the eyes may be in focus, and then the nose is going to be blurry, the lips a little more blurry, and their neck is so blurry, you can hardly make out the necklace they are wearing. Make sense? 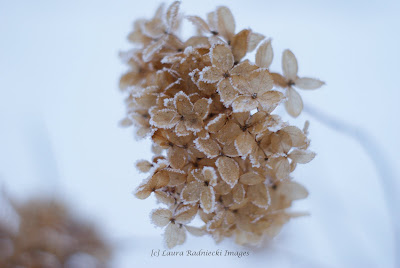 [See in this photo? The middle of the flower is in focus but the rest of it is blurred. That is because the aperture is set at f/2.2, which means that the opening of the hole is big and the depth of field is very shallow.]

So then, the opposite of that fact is true. A large f/number, exp. f/22, which lets in very little light, means that it has a DEEP depth of field. This means that the majority of everything in your photo is going to be in focus. The child’s face will be in focus, as will the trees behind them, and the clouds even further behind.

That’s the basis of aperture!

Reread that until it starts to make sense.

Then we’ll move onto how you’d use them when you are taking a photo. You should be aware that your lens dictates how big your opening can get [how small your f/number can be] and vice versa – how big the f/number is [how small the opening is.] Most beginner lenses, including the one that I started to photograph with, has the value f/3.5-5.6 to f/22. This means that the lowest I can get my f/number to is 3.5-5.6 depending on the conditions. You will need special lenses to get down to an f/1.8 [they make them as low as f/1.2 but they get SPENDY!]

So, now let’s look at the setting called Aperture-Priority. This might be indicated by an A or an Av on the dial of your camera. This basically means that you are able to control your aperture setting, and then the camera will choose the right shutter speed setting needed to get a perfectly exposed photo. You only have to worry about that one number.

How do you pick what aperture you want to use? It depends on what you are photographing. What is your subject? What do you want your photos to look like?

If you are shooting landscape photos, you might want the majority of your photo to be in focus. You want to be able to see the detail is everything. So you would want a deep depth of field. So what would you set your camera to?

Deep depth of field – large f/number – small hole – not much light gets let in.

Let’s pick f/10 or so. That’s a good moderately sized hole, keeping a pretty deep depth of field, and letting in enough light for the camera to take a decently exposed photo.

There you go! A landscape photo in Aperture-Priority. 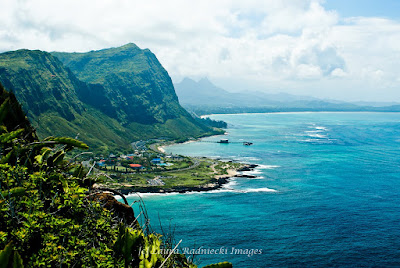 [This photo is taken with an aperture value of f/10. You can see how the grass and leaves in the foreground are in focus, but also the buildings and even the pier are in focus, for the most part. That is due to the deeper depth of field achieved by the larger f/number, and smaller hole.]

Next, you decide to take a photo of a flower. You want it to be one of those photos where the flower is in focus, but the leaves aren’t and the grass beneath it is really fuzzy.

So what do you do?

You want a shallow depth of field.

[This photo is taken using a low f/number, making the depth of field shallow. Only the crab apples in the foreground are in focus, while the rest of the apples, trees, snow, and leaves are out of focus.]

All you do in Aperture-Priority mode is to roll a dial [the placement of the dial is determined by whatever brand of camera you are using. Usually, it’s near the shutter button.] So you set the big dial to A or Av mode [whatever your camera calls it] and then you roll the dial by the shutter button and watch the f/ value in the viewfinder change. And you assess what the subject of your photo is what if you want a lot to be in focus or a little to be in focus. Then you pick your f/number based on that.

You’ve mastered Aperture-Priority! This is the preferred mode for a lot of beginner to moderate photographers. You get some creative control but you don’t have to worry about too many things at once. I use this setting if I am going to be in a fast paced shoot where I am more focused on what poses to pick instead of watching the numbers on the inside of my camera.

Play around with your camera and take some test photos. Be cautious that it is sometimes hard to notice a difference when you are changing the f/ number. It is most dramatic when the f/number is very small, like f/1.8. In a case like that, only a person’s eye might be in focus and the entire rest of the photo is blurry. You notice it a lot then. But if your lens only goes down as far as f/3.5 or f/5.6, you might not notice the difference too much. But nevertheless, the concepts are the same. 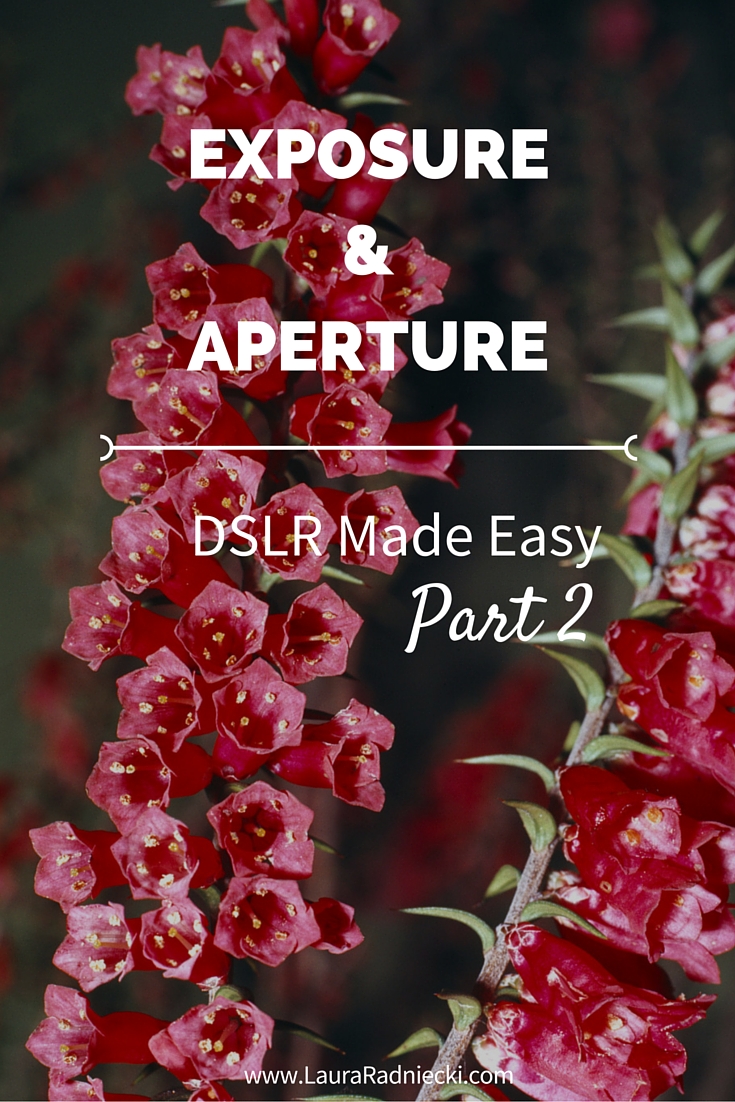 Now, let’s move onto the other aspect of Exposure: Shutter Speed!