Hello! It’s Tuesday, and getting chillier here in Moab, Utah. Matt and I are contemplating where to head to eat, so I thought I’d update quick in the process. It’s been a fantastic two days since the last update!

We went to Arches yesterday morning at about 10 and didn’t leave until almost 6 pm. It was wonderful. We dressed in layers and were warm enough, as long as we stayed mostly in the sun. It was totally blue skies yesterday until about 5 pm, so we lucked out there.
We were absolutely fascinated with all of the arches. We did a total of about 8 miles of hiking yesterday, if you total up all the smaller hikes we did. We saw a variety of arches including: Tunnel Arch, Skyline Arch, Landscape Arch, Broken Arch, Double Arch, Sand Dune [can’t remember the exact name] Arch, North and South Window Arches, Turret Arch… and then we saw lots of great lookouts and the infamous Balanced Rock too.
The one that we didn’t get to yesterday was the most infamous: Delicate Arch. It is a 3 mile hike round trip, so we were too tired by the end of the day to tack that onto our daily total. We went back to the motel and went out to eat at a restaurant here called Eddie McStiff’s. We saw several of the people that we passed on hiking trails throughout the day eating there too.
The original plan was to wake up and attempt to catch a sunrise photo of one of the arches, but needless to say… that didn’t happen. Snooze became our friend and we decided to just head to Arches once we were awake and ready to go. After a continental breakfast, we headed to Arches [I love that it’s only 3 miles down the road!].
After a lookout or two, we went in the direction of Delicate Arch. The beginning of the trail had an old cabin from the late 1800’s and another from 1906 that were there to view from the outside. The story goes that a man named John Wolfe came to Utah to find relief from the dry air because of an injury he got during the Civil War. He took his son with and they settled in this valley in what is now Arches Ntnl Park. There is the remnants of the cattle corral which was so neat to see. Then there is the small [I mean really, really small] cabin that he and his son lived in when they first came. It had a dirt floor and it was almost half underground. John’s daughter, husband and children moved out to Utah in 1906 and the sign said that she didn’t like the cabin they were living in, so she made him build one with a wooden floor. The cabin was a big improvement from the original one, it had a window and it was all sealed in between logs with mud etc. But still, the dimensions were like 12 by 12 feet. Something crazy like that. Looking inside the door, there was a wooden table in the middle and then the rest was bare. It was almost impossible to imagine that many people living there! Maybe they slept outside sometimes haha!
I love old history like that, and imagining what life was like for them, so that was neat for me to see. Matt and I both agreed that for those little kids, it would have been a sweet place to live, because there was so much prairie land and big rocks and such all around to explore and climb. As Matt said, “This would be the best game of hide and seek ever.”
A little bit past the Wolfe’s homestead was a set of Native American petroglyphs that dated somewhere from 1650-1850. Again, I loved looking at that, imagining the people who carved them and what life was like for them around the time they did it. There are several other rock art sites around the area that I might want to visit, but with the weather taking a turn for the worse, I don’t know if we’ll be able to get it in.
We hiked to Delicate Arch after that, and the steep incline was WELL worth it. I had a bit of difficulty on the way there, both because the climb was pretty steep and two – because I must have been worried that I’d freeze to death, because I wore long underwear and jeans today, and man – I was dying. I was sweating to death, even though it was probably a high of 50 plus 15 mile an hour winds. Matt sweetly stopped to let me catch my breath several times and then we finally made it to the arch.
SPECTACULAR.
It was the best of them all, in my opinion. It is the most famous too, since it is on the Utah license plates. We spent 15 minutes there, and I was snapping away with the Sony. The wind was crazy up there, I’m not sure the altitude, but we were up high. That cured me of my overheated feelings. I could have sat there all day, marveling at the arch, but the wind was nipping at us, so we headed back to the parking lot. It was lovely.
I finally dumped the photos off my Sony onto my hard drive today so I am one step closer to processing them all. I do have one to show you; something to give you a glimpse of the awe and wonder of what we saw today. I have more that’ll come in the future, but for now, enjoy Delicate Arch. 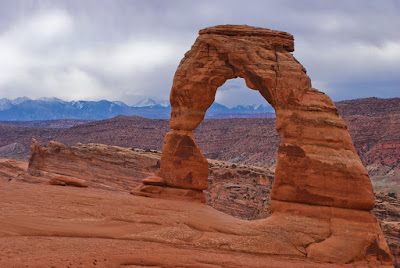 We’re off to grab something to eat and to cruise some tourist shops! Stay warm, those of you in MN! The high here tomorrow is 42, so we’ll be feeling your pain!
Love –
Laura & Matt