Last weekend, I wrote about my decision to finally hire a sleep consultant to help us solve Raleigh’s sleep issues.

After several days of prep work and information gathering, we began official sleep training last night. Pam of Wee Bee Dreaming Pediatric Sleep Consulting is who we are working with.

Part of me didn’t want to write a recap post about our first day. I’m afraid to jinx things.

But I want to be transparent, and I also want to document this time in our lives for my own keepsake purposes.

Last night was the official start of our sleep training process.

Pam is such a talented sleep consultant and puts a ton of effort into the process, so I want to be sensitive of how much of the specifics I share about this process. All I know is it’s been one night, and I think she’s already given me enough information and confidence to be worth the fees we are paying her.

We decided that I would stop all night feedings right from the beginning; “ripping off the bandaid” as my sister put it. Raleigh is old enough that he doesn’t need to feed multiple times at night. And he’s been feeding poorly during the day, likely because he eats so much at night.

I was initially a little nervous about that, because it felt a little cruel to cut out all milk right from the beginning. But it was my choice to go to zero feeds right away. Pam gave me the option to do one at first and then wean to zero, but Matt and I decided to go to zero right away. I knew Raleigh would not starve and would hopefully feed better the next day if he woke up hungry.

Pam and I also determined, through our intake questionnaire and discussion, that I was comfortable with a modified Ferber-like method of sleep training. This would involve me going in to check on Raleigh in progressively longer intervals several times, and then no more checks if he was still awake after the checks were done.

So, armed with my sleep plan and the additional recommendations made by Pam to Raleigh’s routine and sleep environment, last night came.

Prior to this, every time Raleigh woke up at night, he needed a feeding in order to go back to sleep. Matt has never been able to console him enough to get him back to sleep. All he does is protest and whine until I come in and feed. He’s tenacious too; he does this for a LONG time. One night a few months ago, he protested for 45+ minutes until I finally gave in and went to feed so I could go back to sleep. I never gave it a go for any longer than that because 45 minutes feels like 45 hours in the middle of the night.

So, last night started off great with an easy bedtime right on schedule. Raleigh fell asleep with minimal protesting. Yes!

He woke up a few hours later and I thought, “Ok. Here we go!”

When Raleigh wakes up, he stands up at the railing of the crib and cries. Sometimes he whines and fusses, and sometimes he screams too. But mostly, it’s a cry/whine combination. He will just stand and cry, stand and cry.

So last night, he did the same standing and crying at the first wakeup.

I began the plan. I waited the initial 20 minutes to see if he would settle himself, planning to start my checks after that if he wasn’t sleeping. At the end of 20 minutes, he was laying back down, tapping his leg, trying to put himself to sleep. I didn’t go in to check because I knew that would rile him up again, so I let him be. He was asleep 2 minutes later!

Wake up #1 – 22 minutes of crying/fussing and he was back asleep! No feeding needed! SUCCESS!

He woke up again around 3am and we repeated the same process. The same thing happened. After 23-25 minutes, he was asleep again!

Sure, 20+ minutes of fussing/crying seems like a LONG time in the middle of the night, but in the grand scheme of sleep training, HE DID SO GOOD!

That’s why I’m afraid to share this post in some ways, because it’s possible that was a fluke. Tonight could be a different story. But even if it’s a disaster, I want to remember this successful first night.

Raleigh had some sleep-cries in the early morning hours, where he would cry or whine for a minute before going back to sleep. And then he woke up for the day at 6:30am.

Thank you Lord! There is light at the end of this sleepless tunnel! 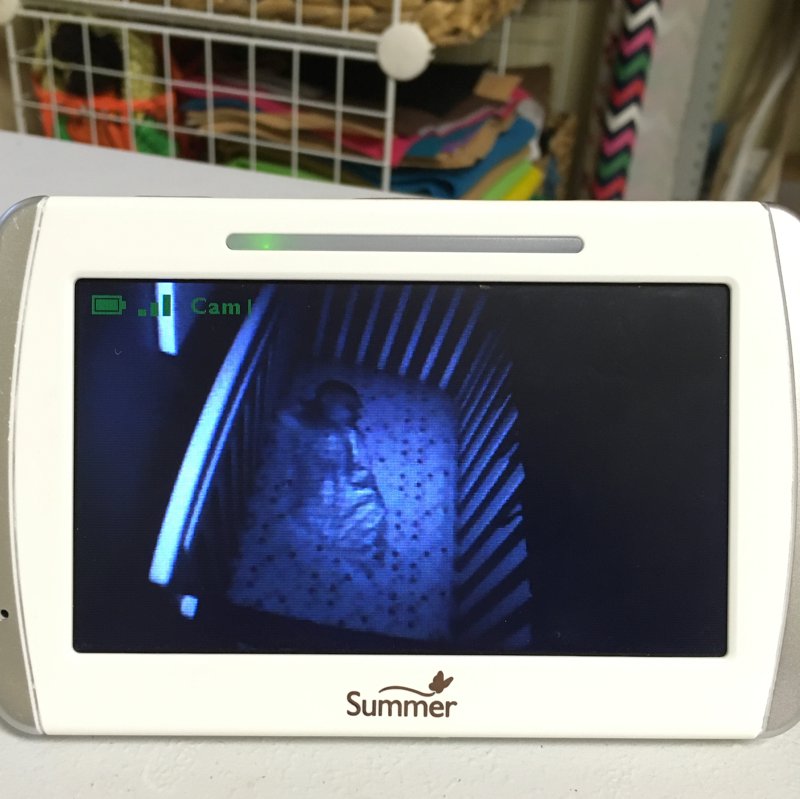 But of course, I had to add a little drama to the night.

I could not sleep for the life of me from 3 to 5am. Like, wide awake, staring at the ceiling, giving the clock the evil eye.

I am sure it was a combination of having a Coke in the evening, working on some blog stuff before bed that got my mind whirling, and then wondering if and when Raleigh would wake up next and how he would do, that made me unable to sleep.

Plus, my body is so used to sleeping in 2-3 hour chunks, it doesn’t know how to stay asleep for longer stretches anymore. I need to learn how to sleep again!

Today, Raleigh did amazing as well.

He fell asleep fast for his naps, and hardly fussed at all.

We stuck firmly to the schedule outlined by Pam, and I spent a lot of the day watching the clock. I took notes throughout the day to report back to her at bedtime.

Because I only got 3-4 hours of sleep last night, I was SO tired this afternoon. I napped during Raleigh’s first nap of the day, and I did a little work during the first part of his second nap. Then, my eye lids felt like cement so I laid down too.

I woke up a while later to Raleigh whining in his crib, and the clock saying that almost 2 1/2 hours had passed since his nap started. I looked at the app I use to track his sleep, and I had stopped the nap timer almost an hour before I woke up. So… was Raleigh really awake and whining for almost an HOUR before I woke up and noticed?!

I honestly don’t know when he woke up and how long he was awake for. Whoops! All of the sleep schedule is based on what time he wakes up, so it’s a crucial thing to know!

I emailed Pam right away and she got back to me fast, giving me some pointers on how to handle bedtime with the unknown end to naptime.

Tomorrow, I am going to set some alarms to make sure I don’t sleep through him waking up like that again!

Remy and the Salmon

To keep things extra interesting, Remy has been getting into mischief lately.

Matt threw some salmon into the woods this weekend, thinking wild animals would take it away quickly. For some reason, they haven’t and the fish is still there.

Yesterday, Remy was taking the longest bathroom break ever and I started to get worried something happened to her. I went outside and she ran toward the front door with something in her mouth. I looked close and it was a chunk of the dried out salmon from the woods. She wanted to take it inside!

I had to physically pry it from her little jaws because she wanted it so badly.

Later in the day yesterday, I heard her whining at the door to come inside after another bathroom break. I opened the door and she sprinted in. I didn’t notice until she was in the living room that she had a piece of salmon in her mouth. I hollered “Remy, no!” and she dropped it on the floor. Raleigh started crawling toward it, of  course.

Then today, she was outside far too long and I went to the front door to call for her. I looked down and she was standing on the front porch, chomping on another hunk of salmon. I watched for a second and went to go get my phone to take another video of her salmon escapades to send to Matt. When I came back 10 seconds later she was looking at me, licking her lips. She ate and swallowed the whole thing!

I expected some puppy barf or poop in the house this afternoon but [knocking on wood] – so far so good.

This motherhood thing is not dull, that’s for sure.

As I type this update, Raleigh is in bed, asleep.

I pray tonight goes the same or better than last night did. But if it doesn’t, that’s ok. Authenticity. That’s my goal.

I pray I am able to sleep better tonight. No pop or business brainstorming before bed.

I feel like we are on the right track and there is light at the end of our sleepless tunnel.

Raleigh, we are proud of how well you are doing! I know it’s new and different. But we will ALL benefit with better sleep. I promise. 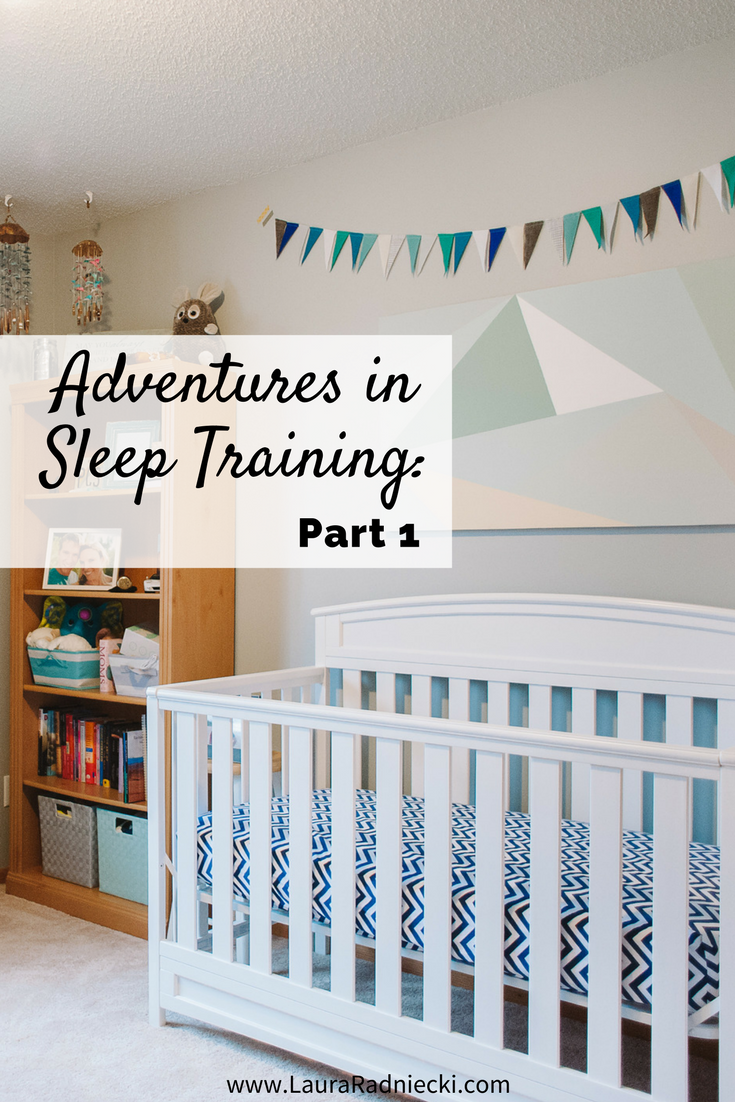 Previous Post: « From Digital to Print | Into Real Pages Blog Books
Next Post: When the Nursery Became His »