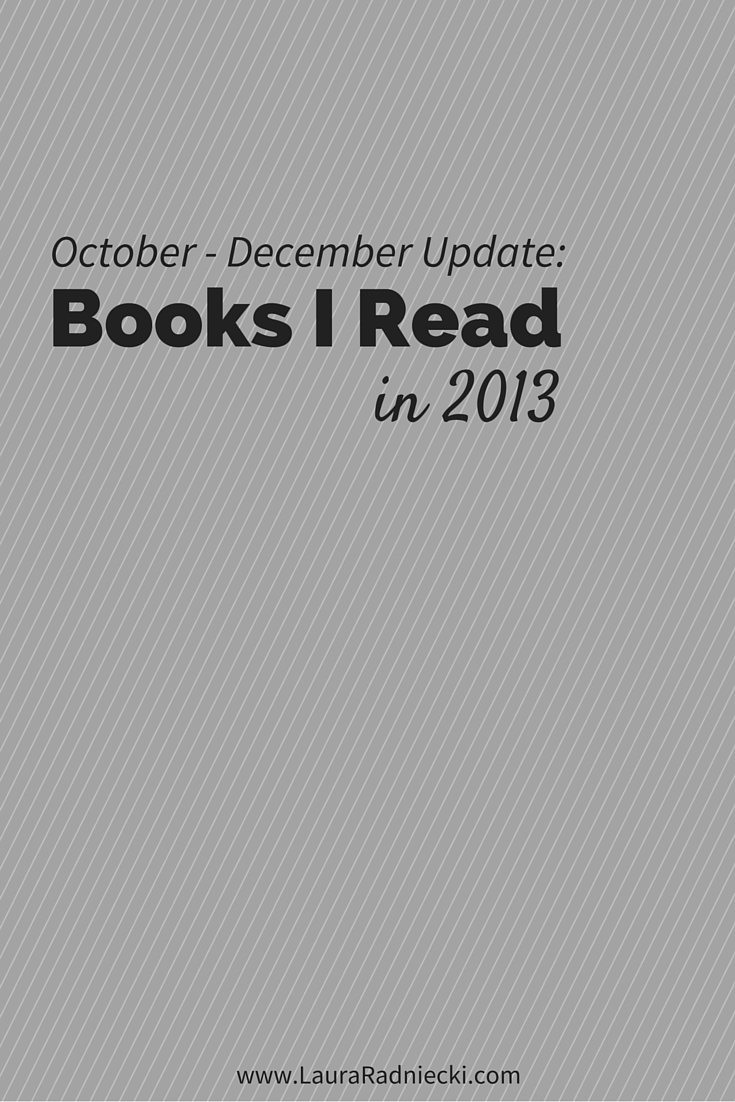 This was one of my Book Club books. It was beautifully written and I felt like the characters were people I’d known forever.

It wasn’t a book with a super happy ending, which left me with a bad taste in my mouth. I LOVE a good happy ending in my books and movies, so the fact that I felt sadness and sorrow after this book was over kept me from loving it. I did like it though.

This book was fantastic! It was part of Oprah’s Book Club once and I picked it up at our library’s book sale. With my nursing degree and birth place training, it was interesting subject matter for me. It was also a book that kept me wondering and kept me turning the pages as fast as I could.

I highly recommend it!

I scooped this book up from some young adult books my sister was giving away to charity. I was struck by the title and the saying that was on the front: “In a world of extreme beauty, everyone normal is ugly.” SOLD! I’m in!

It’s mostly based in normal life, but it’s futuristic so there is some future technology that was fun to think about. What if it’s really like that in a few hundred years! The way the kids talk is also different and I found myself thinking about their vocab when I wasn’t reading. I might have even used some of their terms in my real life, haha! I was even more thrilled to find out this was the first book in a series, because I LOVE series!

This was another of my Book Club books. It’s an old book that many people have read in grade school; it’s a classic. I had never heard of it so I downloaded it off amazon for my kindle app and read it on my ipad. [The third book I’ve ever read on my ipad!]

It was an interesting read about a young girl who marries a canadian mountee and moves to the rural wilderness of northern Canada. It was funny, happy and sad. The way it was written was a little choppy and not all that sophisticated. But it was written a long time ago and really, I’m not that sophisticated. So I didn’t mind. It was a fun read and made me glad that I don’t have to live in that time period, in that climate!

Book Two in the Uglies Series. Just as good as the first!

This series had a way of turning the loyalties of the characters around so you are rooting for one person one time and then pretty soon, you like the other one better and want them to come out on top. Such an interesting series!

Book Three in the Uglies Series. Again, loved it!

It was hard for me to believe this is a young adult series. The author tied in so many relevant and important issues like environmentalism, the way the media manipulates our perception of beauty, genetics, government etc. The book is layered with subtle controversial topics that would make for such great discussions! I wonder if high schools are having kids read these books? Or junior high maybe?

Scott Westerfeld intended the Uglies Series to be a trilogy. But it was such a huge hit and his fans bombarded him with so much fan mail that he wrote a fourth book. It’s set later, with a different set of characters. But it tied in the original characters too, which was great.

I was left still wanting more, even after this fourth and last book was finished!

For Book Club in December, we were told to read a Christmas book. I browsed the shelves at the public library and came across this one. It was a lighthearted, fun, romantic read – exactly my type of book! I plan to read more from Janet Dailey. I think she writes a Christmas/cowboy inspired book every year, so I’ll have plenty to read.

A Hundred Summers by Beatriz Williams –

I put my name on the waiting list for this book in the summer. There must have been so many people on the list before me, because it took me 6 months to get it.

It was a beautifully written book, set on the east coast. It flips between two time periods, in the 1920’s and 30’s, I believe. It’s the same characters, just at a time in the past and in the present. Each chapter flipped back and forth which drove me crazy sometimes, but the book was truly incredible. Beatriz Williams has written at least one other book which I added to my To-Read list. She’s a fantastic writer so I’m sure her other book will be great too.

If you want to look back on the rest of my 2013 books, here are the links:

Did you read anything incredible in 2013? Let me know if you have a new favorite book or even better, a series! I’m adding to my To-Read list!